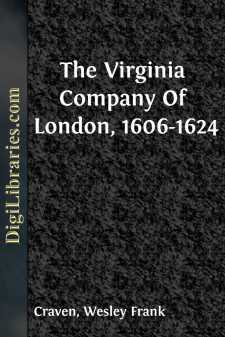 This is the story of the Virginia Company and only indirectly of the Virginia colony. Those who seek an account of the early years at Jamestown should turn to another number in this same series. Here the focus belongs to the adventurers in England whose hopes gave shape to the settlement at Jamestown, and whose determination brought the colony through the many disappointments of its first years. In terms of time, the story is short, for it begins with the granting of the first Virginia charter in 1606 and ends with the dissolution of the company in 1624. It thus covers a period of only eighteen years, but during these years England's interest in North America was so largely expressed through the agency of the Virginia Company that its story constitutes one of the more significant chapters in the history both of the United States and of the British Empire.

In the beginning there were two companies of the Virginia adventurers, the one having its headquarters in London and the other in the western outport of Plymouth. Englishmen at that time used the name Virginia to designate the full sweep of the North American coast that lay above Spanish Florida. In the original Virginia charter the adventurers were granted rights of exploration, trade, and settlement on the "Coast of Virginia or America" within limits that reached from 34° of latitude in the south to 45° in the north, which is to say from the mouth of the Cape Fear River in lower North Carolina to a point midway through the modern state of Maine. The Plymouth grantees had a primary interest in the northern area that Captain John Smith would later name New England, and there they established a colony at Sagadahoc in August 1607, only a few weeks after the settlement of Jamestown. But the colony barely survived the winter, and was abandoned in the spring of 1608. Thereafter, the Plymouth adventurers gave up. In contrast, the London adventurers persisted, and their persistence served to tie the name of Virginia increasingly to them and to their more southerly settlement. As a result, the London adventurers became in common usage the Virginia adventurers, their company the Virginia Company, and their colony Virginia.

The Virginia colony was especially fortunate in having the backing of London. Indeed, it may not be too much to suggest that the chief difference between the stories of Roanoke Island and of Jamestown was the difference that London made. Consistently, the leadership of Elizabethan adventures to North America, including those of Gilbert and Raleigh, had come from the western counties and outports of England, and with equal consistency hopeful projects had foundered on the inadequacy of their financial support while London favored other ventures—to Muscovy, to the Levant, and more recently to the East Indies. It was not merely that London had the necessary capital and credit for a sustained effort; it also had experience in the management of large and distant ventures, such as those of the East India Company over which Sir Thomas Smith presided, as he would preside through many years over the Virginia Company. London had too the advantage of its proximity to the seat of government in nearby Westminster, where King James had his residence, where the highest courts of the realm sat periodically, and where England's parliament customarily met. Already, in 1606, it was possible to trace in the immediate environs of the ancient City of London, itself still medieval in appearance and in the organization of much of its life, the broad outlines of the great metropolis that has been increasingly the focal point of England's development as a modern state.

In thus emphasizing the importance of London to the early history of Virginia, one runs the risk of misrepresenting the true character of the Virginia adventure. Contrary to the impression that will be gained from many of our modern textbooks, the Virginia Company represented much more than the commercial interests of the port of London....