by B. W. (Berkeley William) Randolph 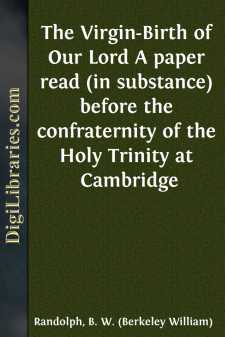 I will therefore, without any further preface, plunge into the middle of the subject, and ask you, first of all, to consider afresh that 'throughout the Church the statement of the belief in the Virgin-Birth had its place from so early a date, and is traceable along so many different lines of evidence, as to force upon us the conclusion that, before the death of the last Apostle, the Virgin-Birth must have been among the rudiments of the Faith in which every Christian was initiated;' that if we believe the Divine guidance in the Church at all, we must needs believe that this mystery was part of "the Faith once for all delivered to the Saints."

Bear with me, then, while I go over the evidence of the leading witnesses.

He must have become Bishop of Antioch quite early in the second century. As he passes through Asia about the year 110, he is on his way to martyrdom, and in his Epistles he speaks emphatically of the Virgin-Birth.

In the Epistle to the Ephesians, he says: "Hidden from the prince of this world were the Virginity of Mary and her child-bearing, and likewise also the death of our Lord—three mysteries of open proclamation, the which were wrought in the silence of God."*

In the Epistle to the Symrnaeans, he says: "I give glory to Jesus Christ, the God who bestowed such wisdom upon you; for I have perceived that ye are established in faith immovable… firmly persuaded as touching our Lord, that He is truly of the race of David according to the flesh, but Son of God by the Divine will and power, truly born of a Virgin, and baptized by John… truly nailed up for our sakes in the flesh, under Pontius Pilate and Herod the tetrarch."+

In his Epistle to the Trallians, he writes: "Be ye deaf, therefore, when any man Speaketh to you apart from Jesus Christ, who was of the race of David, who was the Son of Mary, who was truly born."*

In his Apology, written about the year 130, mentioning the Virgin-Birth as an Integral portion of the Catholic Faith, he writes: "The Christians trace their descent from the Lord Jesus Christ; now He is confessed by the Holy Ghost to be the Son of the Most High God, having come down from heaven for the salvation of men, and having been born of a holy Virgin+ ....