The Vicissitudes of Bessie Fairfax 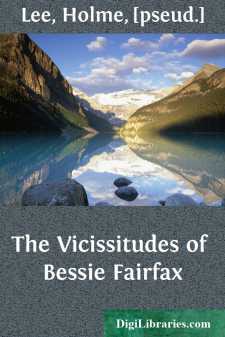 CHAPTER I. HER BIRTH AND PARENTAGE.

The years have come and gone at Beechhurst as elsewhere, but the results of time and change seem to have almost passed it by. Every way out of the scattered forest-town is still through beautiful forest-roads—roads that cleave grand avenues, traverse black barren heaths, ford shallow rivers, and climb over ferny knolls whence the sea is visible. The church is unrestored, the parsonage is unimproved, the long low house opposite is still the residence of Mr. Carnegie, the local doctor, and looks this splendid summer morning precisely as it looked in the splendid summer mornings long ago, when Bessie Fairfax was a little girl, and lived there, and was very happy.

Bessie was not akin to the doctor. Her birth and parentage were on this wise. Her father was Geoffry, the third and youngest son of Mr. Fairfax of Abbotsmead in Woldshire. Her mother was Elizabeth, only child of the Reverend Thomas Bulmer, vicar of Kirkham. Their marriage was a love-match, concluded when they had something less than the experience of forty years between them. The gentleman had his university debts besides to begin life with, the lady had nothing. As the shortest way to a living he went into the Church, and the birth of their daughter was contemporary with Geoffry's ordination. His father-in-law gave him a title for orders, and a lodging under his roof, and Mr. Fairfax grudgingly allowed his son two hundred a year for a maintenance.

The young couple were lively and handsome. They had done a foolish thing, but their friends agreed to condone their folly. Before very long a south-country benefice, the rectory of Beechhurst, was put in Geoffry's way, and he gayly removed with his wife and child to that desirable home of their own. They were poor, but they were perfectly contented. Nature is sometimes very kind in making up to people for the want of fortune by an excellent gift of good spirits and good courage. She was very kind in this way to Geoffry Fairfax and his wife Elizabeth; so kind that everybody wondered with great amazement what possessed that laughing, rosy woman to fall off in health, and die soon after the birth of a second daughter, who died also, and was buried in the same grave with her mother.

The rector was a cheerful exemplification of the adage that man is not made to live alone. He wore the willow just long enough for decency, and then married again—married another pretty, portionless young woman of no family worth mentioning. This reiterated indiscretion caused a breach with his father, and the slender allowance that had been made him was resumed. But his new wife was good to his little Bessie, and Abbotsmead was a long way off.

There were no children of this second marriage, which was lucky; for three years after, the rector himself died, leaving his widow as desolate as a clergyman's widow, totally unprovided for, can be. She had never seen any member of her husband's family, and she made no claim on Mr. Fairfax, who, for his part, acknowledged none. Bessie's near kinsfolk on her mother's side were all departed this life; there was nobody who wanted the child, or who would have regarded her in any light but an incumbrance. The rector's widow therefore kept her unquestioned; and being a woman of much sense and little pride, she moved no farther from the rectory than to a cottage-lodging in the town, where she found some teaching amongst the children of the small gentry, who then, as now, were its main population.

It was hard work for meagre reward, and perhaps she was not sorry to exchange her mourning-weeds for bride-clothes again when Mr. Carnegie asked her; for she was of a dependent, womanly character, and the doctor was well-to-do and well respected, and ready with all his heart to give little Bessie a home. The child was young enough when she lost her own parents to lose all but a reflected memory of them, and cordially to adopt for a real father and mother those who so cordially adopted her.

Still, she was Bessie Fairfax, and as the doctor's house grew populous with children of his own, Bessie was curtailed of her indulgences, her learning, her leisure, and was taught betimes to make herself useful. And she did it willingly. Her temper was loving and grateful, and Mrs. Carnegie had her recompense in Bessie's unstinting helpfulness during the period when her own family was increasing year by year; sometimes at the rate of one little stranger, and sometimes at the rate of twins....