The Venetian Painters of the Renaissance Third Edition 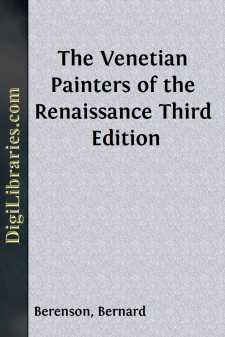 THE VENETIAN PAINTERS OF THE RENAISSANCE

I. Value of Venetian Art.—Among the Italian schools of painting the Venetian has, for the majority of art-loving people, the strongest and most enduring attraction. In the course of the present brief account of the life of that school we shall perhaps discover some of the causes of our peculiar delight and interest in the Venetian painters, as we come to realise what tendencies of the human spirit their art embodied, and of what great consequence their example has been to the whole of European painting for the last three centuries.

The Venetians as a school were from the first endowed with exquisite tact in their use of colour. Seldom cold and rarely too warm, their colouring never seems an afterthought, as in many of the Florentine painters, nor is it always suggesting paint, as in some of the Veronese masters. When the eye has grown accustomed to make allowance for the darkening caused by time, for the dirt that lies in layers on so many pictures, and for unsuccessful attempts at restoration, the better Venetian paintings present such harmony of intention and execution as distinguishes the highest achievements of genuine poets. Their mastery over colour is the first thing that attracts most people to the painters of Venice. Their colouring not only gives direct pleasure to the eye, but acts like music upon the moods, stimulating thought and memory in much the same way as a work by a great composer.

II. The Church and Painting.—The Church from the first took account of the influence of colour as well as of music upon the emotions. From the earliest times it employed mosaic and painting to enforce its dogmas and relate its legends, not merely because this was the only means of reaching people who could neither read nor write, but also because it instructed them in a way which, far from leading to critical enquiry, was peculiarly capable of being used as an indirect stimulus to moods of devotion and contrition. Next to the finest mosaics of the first centuries, the early works of Giovanni Bellini, the greatest Venetian master of the fifteenth century, best fulfil this religious intention. Painting had in his lifetime reached a point where the difficulties of technique no longer stood in the way of the expression of profound emotion. No one can look at Bellini's pictures of the Dead Christ upheld by the Virgin or angels without being put into a mood of deep contrition, nor at his earlier Madonnas without a thrill of awe and reverence. And Giovanni Bellini does not stand alone. His contemporaries, Gentile Bellini, the Vivarini, Crivelli, and Cima da Conegliano all began by painting in the same spirit, and produced almost the same effect.

The Church, however, thus having educated people to understand painting as a language and to look to it for the expression of their sincerest feelings, could not hope to keep it always confined to the channel of religious emotion. People began to feel the need of painting as something that entered into their every-day lives almost as much as we nowadays feel the need of the newspaper; nor was this unnatural, considering that, until the invention of printing, painting was the only way, apart from direct speech, of conveying ideas to the masses....