The Veiled Lady and Other Men and Women 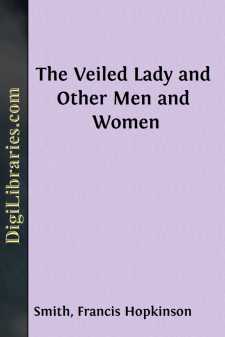 This collection of stories has been labelled "The Veiled Lady" as being the easiest way out of a dilemma; and yet the title may be misleading. While, beyond doubt, there is between these covers a most charming and lovable Houri, to whom the nightingales sing lullabies, there can also be found a surpassingly beautiful Venetian whose love affairs upset a Quarter, a common-sense, motherly nurse whose heart warmed toward her companion in the adjoining berth, a plucky New England girl with the courage of her convictions, and a prim spinster whose only consolation was the boarder who sat opposite.

Nor does the list by any means end here. Rough sea-dogs, with friendly feelings toward other dogs, crop up, as well as brave Titans who make derricks of their arms and fender-piles of their bodies. Here, too, are skinny, sun-dried Excellencies with a taste for revolutions, well-groomed club swells with a taste for adventure and cocktails, not to mention half a dozen gay, rollicking Bohemians with a taste for everything that came their way.

Perhaps it might have been best to enclose each story in a separate cover, and then to dump the unassorted lot upon the table, where those who wished could make their choice. And yet, as I turn the leaves, I must admit that, after all, the present form is best, since each and every incident, situation, and bit of local color has either passed before or was poured into the wide-open eyes and willing ears of your most humble and obedient servant

THE VEILED LADY OF STAMBOUL

Joe Hornstog told me this story—the first part of it; the last part of it came to me in a way which proves how small the world is.

Joe belongs to that conglomerate mass of heterogeneous nationalities found around the Golden Horn, whose ancestry is as difficult to trace as a gypsy's. He says he is a "Jew gentleman from Germany," but he can't prove it, and he knows he can't.

There is no question about his being part Jew, and there is a strong probability of his being part German, and, strange to say, there is not the slightest doubt of his being part gentleman—in his own estimation; and I must say in mine, when I look back over an acquaintance covering many years and remember how completely my bank account was at his disposal and how little of its contents he appropriated.

And yet, were I required to hold up my hand in open court, I would have to affirm that Joe, whatever his other strains might be, was, after all, ninety-nine per cent. Levantine—which is another way of saying that he is part of every nationality about him.

As to his honesty and loyalty, is he not the chosen dragoman of kings and princes when they journey into far distant lands (he speaks seven languages and many tribal dialects), and is he not today wearing in his buttonhole the ribbon of the order of the Mejidieh, bestowed upon him by his Imperial Highness the Sultan, in reward for his ability and faithfulness?

I must admit that I myself have been his debtor—not once, but many times. It was this same quick-sighted, quick-witted Levantine who lifted me from my sketching stool and stood me on my feet in the plaza of the Hippodrome one morning just in time to prevent my being trodden under foot by six Turks carrying the body of their friend to the cemetery—in time, too, to save me from the unforgivable sin among Orientals, of want of reverence for their dead. I had heard the tramp of the pall-bearers, and supposing it to be that of the Turkish patrol, had kept at work. They were prowling everywhere, day and night, and during those days they passed every ten minutes—nine soldiers in charge of an officer of police—all owing to the fact that some five thousand Armenians, anxious to establish a new form of government, had been wiped out of existence only the week before....