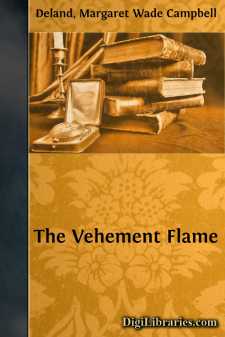 Love is as strong as death; jealousy is cruel as the grave: the coals thereof are coals of fire, which hath a most vehement flame. THE SONG OF SOLOMON, VIII, 6.

There is nothing in the world nobler, and lovelier, and more absurd, than a boy's lovemaking. And the joyousness of it!...

The boy of nineteen, Maurice Curtis, who on a certain June day lay in the blossoming grass at his wife's feet and looked up into her dark eyes, was embodied Joy! The joy of the warm earth, of the sunshine glinting on the slipping ripples of the river and sifting through the cream-white blossoms of the locust which reared its sheltering branches over their heads; the joy of mating insects and birds, of the whole exulting, creating universe!—the unselfconscious, irresponsible, wholly beautiful Joy of passion which is without apprehension or humor. The eyes of the woman who sat in the grass beside this very young man, answered his eyes with Love. But it was a more human love than his, because there was doubt in its exultation....

The boy took out his watch and looked at it.

"We have been married," he said, "exactly fifty-four minutes."

"If I love you like this after fifty-four minutes of married life, how do you suppose I shall feel after fifty-four years of it?" He flung an arm about her waist, and hid his face against her knee. "We are married," he said, in a smothered voice.

She bent over and kissed his thick hair, silently. At which he sat up and looked at her with blue, eager eyes.

"It just came over me! Oh, Eleanor, suppose I hadn't got you? You said 'No' six times. You certainly did behave very badly," he said, showing his white teeth in a broad grin.

"Some people win say I behaved very badly when I said 'Yes.'"

"Tell 'em to go to thunder! What does Mrs. Maurice Curtis (doesn't that sound pretty fine?) care for a lot of old cats? Don't we know that we are in heaven?" He caught her hand and crushed it against his mouth. "I wish," he said, very low, "I almost wish I could die, now, here! At your feet. It seems as if I couldn't live, I am so—" He stopped. So—what? Words are ridiculously inadequate things!... "Happiness" wasn't the name of that fire in his breast, Happiness? "Why, it's God," he said to himself; "God." Aloud, he said, again, "We are married!"

She did not speak—she was a creature of alluring silences—she just put her hand in his. Suddenly she began to sing; there was a very noble quality in the serene sweetness of her voice:

"O thou with dewy locks, who lookest downThrough the clear windows of the morning, tenThine angel eyes upon our western isle,Which in full choir hails thy approach, O Spring!"

That last word rose like a flight of wings into the blue air. Her husband looked at her; for a compelling instant his eyes dredged the depths of hers, so that all the joyous, frightened woman in her retreated behind a flutter of laughter.

"'O Spring!'" he repeated; "we are Spring, Nelly—you and I.... I'll never forget the first time I heard you sing that; snowing like blazes it was,—do you remember? But I swear I felt this hot grass then in Mrs....