The Vast Abyss The Story of Tom Blount, his Uncles and his Cousin Sam 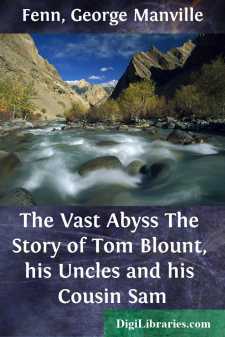 Tom Blount said this to himself as he balanced that self upon a high stool at a desk in his uncle’s office in Gray’s Inn. There was a big book lying open, one which he had to study, but it did not interest him; and though he tried very hard to keep his attention fixed upon its learned words, invaluable to one who would some day bloom into a family solicitor, that book would keep on forming pictures that were not illustrations of legal practice in the courts of law. For there one moment was the big black pond on Elleston Common, where the water lay so still and deep under the huge elms, and the fat tench and eels every now and then sent up bubbles of air, dislodged as they disturbed the bottom.

At another time it would be the cricket-field in summer, or the football on the common in winter, or the ringing ice on the winding river, with the skates flashing as they sent the white powder flying before the wind.

Or again, as he stumbled through the opinions of the judge in “Coopendale versus Drabb’s Exors.,” the old house and garden would stand out from the page like a miniature seen on the ground-glass of a camera; and Tom Blount sighed and his eyes grew dim as he thought of the old happy days in the pleasant home. For father and mother both had passed away to their rest; the house was occupied by another tenant; and he, Tom Blount, told himself that he ought to be very grateful to Uncle James for taking him into his office, to make a man of him by promising to have him articled if, during his year of probation, he proved himself worthy.

“I wouldn’t mind its being so dull,” he thought, “or my aunt not liking me, or Sam being so disagreeable, if I could get on—but I can’t. Uncle’s right, I suppose, in what he says. He ought to know. I’m only a fool; and it doesn’t seem to matter how I try, I can’t get on.”

Just then a door opened, letting in a broad band of sunshine full of dancing motes, and at the same time Samuel Brandon, a lad of about the same age as Tom, but rather slighter of build, but all the same more manly of aspect. He was better dressed too, and wore a white flower in his button-hole, and a very glossy hat. One glove was off, displaying a signet-ring, and he brought with him into the dingy office a strong odour of scent, whose source was probably the white pocket-handkerchief prominently displayed outside his breast-pocket.

“Likely! Think I’m going to find you in brains. Hurry on and peg away. Shovel it in, and think you are going to be Lord Chancellor some day. Guv’nor in his room?”

“No; he has gone on down to the Court. Going out?”

“Yes; up the river—Maidenhead. You heard at the breakfast, didn’t you?”

“You never hear anything or see anything....