The Variation of Animals and Plants Under Domestication, Volume II (of 2) 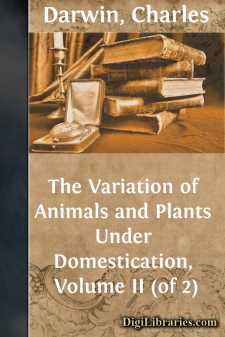 The subject of inheritance is an immense one, and has been treated by many authors. One work alone, 'De l'Hérédité Naturelle,' by Dr. Prosper Lucas, runs to the length of 1562 pages. We must confine ourselves to certain points which have an important bearing on the general subject of variation, both with domestic and natural productions. It is obvious that a variation which is not inherited throws no light on the derivation of species, nor is of any service to man, except in the case of perennial plants, which can be propagated by buds.

If animals and plants had never been domesticated, and wild ones alone had been observed, we should probably never have heard the saying, that "like begets like." The proposition would have been as self-evident, as that all the buds on the same tree are alike, though neither proposition is strictly true. For, as has often been remarked, probably no two individuals are identically the same. All wild animals recognise each other, which shows that there is some difference between them; and when the eye is well practised, the shepherd knows each sheep, and man can distinguish a fellow-man out of millions on millions of other men. Some authors have gone so far as to maintain that the production of slight differences is as much a necessary function of the powers of generation, as the production of offspring like their parents. This view, as we shall see in a future chapter, is not theoretically probable, though practically it holds good. The saying that "like begets like" has in fact arisen from the perfect confidence felt by breeders, that a superior or inferior animal will generally reproduce its kind; but this very superiority or inferiority shows that the individual in question has departed slightly from its type.

The whole subject of inheritance is wonderful. When a new character arises, whatever its nature may be, it generally tends to be inherited, at least in a temporary and sometimes in a most persistent manner. What can be more wonderful than that some trifling peculiarity, not primordially attached to the species, should be transmitted through the male or female sexual cells, which are so minute as not to be visible to the naked eye, and afterwards through the incessant changes of a long course of development, undergone either in the womb or in the egg, and ultimately appear in the offspring when mature, or even when quite old, as in the case of certain diseases? Or again, what can be more wonderful than the well-ascertained fact that the minute ovule of a good milking cow will produce a male, from whom a cell, in union with an ovule, will produce a female, and she, when mature, will have large mammary glands, yielding an abundant supply of milk, and even milk of a particular quality? Nevertheless, the real subject of surprise is, as Sir H. Holland has well remarked, not that a character should be inherited, but that any should ever fail to be inherited. In a future chapter, devoted to an hypothesis which I have termed pangenesis, an attempt will be made to show the means by which characters of all kinds are transmitted from generation to generation.

Some writers, who have not attended to natural history, have attempted to show that the force of inheritance has been much exaggerated. The breeders of animals would smile at such simplicity; and if they condescended to make any answer, might ask what would be the chance of winning a prize if two inferior animals were paired together? They might ask whether the half-wild Arabs were led by theoretical notions to keep pedigrees of their horses?...