The Variation of Animals and Plants Under Domestication, Vol. I. 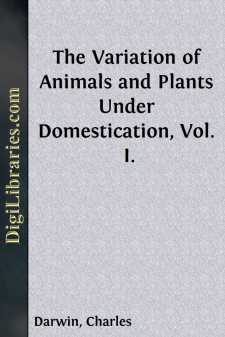 The object of this work is not to describe all the many races of animals which have been domesticated by man, and of the plants which have been cultivated by him; even if I possessed the requisite knowledge, so gigantic an undertaking would be here superfluous. It is my intention to give under the head of each species only such facts as I have been able to collect or observe, showing the amount and nature of the changes which animals and plants have undergone whilst under man's dominion, or which bear on the general principles of variation. In one case alone, namely in that of the domestic pigeon, I will describe fully all the chief races, their history, the amount and nature of their differences, and the probable steps by which they have been formed. I have selected this case, because, as we shall hereafter see, the materials are better than in any other; and one case fully described will in fact illustrate all others. But I shall also describe domesticated rabbits, fowls, and ducks, with considerable fullness.

The subjects discussed in this volume are so connected that it is not a little difficult to decide how they can be best arranged. I have determined in the first part to give, under the heads of the various animals and plants, a large body of facts, some of which may at first appear but little related to our subject, and to devote the latter part to general discussions. Whenever I have found it necessary to give numerous details, in support of any proposition or conclusion, small type has been used. The reader will, I think, find this plan a convenience, for, if he does not doubt the conclusion or care about the details, he can easily pass them over; yet I may be permitted to say that some of the discussions thus printed deserve attention, at least from the professed naturalist.

It may be useful to those who have read nothing about Natural Selection, if I here give a brief sketch of the whole subject and of its bearing on the origin of species. This is the more desirable, as it is impossible in the present work to avoid many allusions to questions which will be fully discussed in future volumes.

From a remote period, in all parts of the world, man has subjected many animals and plants to domestication or culture. Man has no power of altering the absolute conditions of life; he cannot change the climate of any country; he adds no new element to the soil; but he can remove an animal or plant from one climate or soil to another, and give it food on which it did not subsist in its natural state. It is an error to speak of man "tampering with nature" and causing variability. If organic beings had not possessed an inherent tendency to vary, man could have done nothing. He unintentionally exposes his animals and plants to various conditions of life, and variability supervenes, which he cannot even prevent or check. Consider the simple case of a plant which has been cultivated during a long time in its native country, and which consequently has not been subjected to any change of climate....