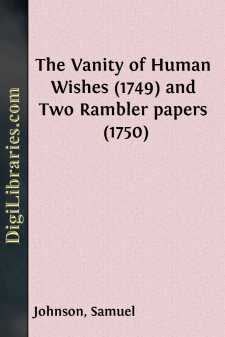 The pieces reproduced in this little volume are now beginning to bid for notice from their third century of readers. At the time they were written, although Johnson had already done enough miscellaneous literary work to fill several substantial volumes, his name, far from identifying an "Age", was virtually unknown to the general public. The Vanity of Human Wishes was the first of his writings to bear his name on its face. There were some who knew him to be the author of the vigorous satire, London, and of the still more remarkable biographical study, An Account of the Life of Mr. Richard Savage; and a few interested persons were aware that he was engaged in compiling an English Dictionary, and intended to edit Shakespeare. He was also, at the moment, attracting brief but not over-favorable attention as the author of one of the season's new crop of tragedies at Drury Lane. But The Vanity of Human Wishes and The Rambler were a potent force in establishing Johnson's claim to a permanent place in English letters. The Vanity appeared early in January, 1749; The Rambler ran from March 20, 1749/50 to March 14, 1752. With the exception of five numbers and two quoted letters, the periodical was written entirely by Johnson.

As moral essays, the Ramblers deeply stirred some readers and bored others. Young Boswell, not unduly saturnine in temperament, was profoundly impressed by them and determined on their account to seek out the author. Taine, a century later, discovered that he already knew by heart all they had to teach and warned his readers away from them. Generally speaking, they were valued as they deserved by the eighteenth century and undervalued by the nineteenth. The first half of the twentieth has shown a marked impulse to restore them, as a series, to a place of honor second only to the work of Addison and Steele in the same form. Raleigh, in 1907, paid discriminating tribute to their humanity. If read, he observed, against a knowledge of their author's life, "the pages of The Rambler are aglow with the earnestness of dear-bought conviction, and rich in conclusions gathered not from books but from life and suffering." And later: "We come to closer quarters with Johnson in the best pages of The Rambler than in the most brilliant of the conversations recalled by Boswell. The hero of a hundred fights puts off his armour, and becomes a wise and tender confessor." Latterly, the style of Johnson's essays has been subjected to a closer scrutiny than ever before. What Taine found as inflexible and inert as a pudding-mold is now seen to be charged with life and movement, vibrant with light and shadow and color. More particularly, Wimsatt has shown how intimately connected is the vocabulary of The Rambler with Johnson's reading for the Dictionary, and how, having mastered the words of the experimental scientists of the previous century, Johnson proceeded to put them to original uses, generating with them new stylistic overtones in contexts now humorously precise, now philosophically metaphorical, employing them now for purposes of irony and satire, and again for striking directly home to the roots of morality and religion....