The Van Dwellers A Strenuous Quest for a Home 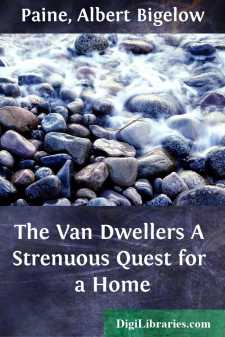 The First Home in the Metropolis.

We had never lived in New York. This fact will develop anyway, as I proceed, but somehow it seems fairer to everybody to state it in the first sentence and have it over with.

Still, we had heard of flats in a vague way, and as we drew near the Metropolis the Little Woman bought papers of the train boy and began to read advertisements under the head of "Flats and Apartments to Let."

I remember that we wondered then what was the difference. Now, having tried both, we are wiser. The difference ranges from three hundred dollars a year up. There are also minor details, such as palms in the vestibule, exposed plumbing, and uniformed hall service—perhaps an elevator, but these things are immaterial. The price is the difference.

We bought papers, as I have said. It was the beginning of our downfall, and the first step was easy—even alluring. We compared prices and descriptions and put down addresses. The descriptions were all that could be desired and the prices absurdly modest. We had heard that living in the city was expensive; now we put down the street and number of "four large light rooms and improvements, $18.00," and were properly indignant at those who had libeled the landlords of Gotham.

Next morning we stumbled up four dim flights of stairs, groped through a black passage-way and sidled out into a succession of gloomy closets, wondering what they were for. Our conductor stopped and turned.

"This is it," he announced. "All nice light rooms, and improvements."

It was our first meeting with a flat. Also, with a janitor. The Little Woman was first to speak.

"Ah, yes, would you mind telling us—we're from the West, you know—just which are the—the improvements, and which the rooms?"

This was lost on the janitor. He merely thought us stupid and regarded us with pitying disgust as he indicated a rusty little range, and disheartening water arrangements in one corner. There may have been stationary tubs, too, bells, and a dumb waiter, but without the knowledge of these things which we acquired later they escaped notice. What we could see was that there was no provision for heat that we could discover, and no sunshine.

But these objections seemed unreasonable, no doubt, for the janitor, who was of Yorkshire extraction, became taciturn and remarked briefly that the halls were warmed and that nobody before had ever required more heat than they got from these and the range, while as for the sun, he couldn't change that if he wanted to, leaving us to infer that if he only wanted to he could remodel almost everything else about the premises in short order.

We went away in the belief that he was a base pretender, "clad in a little brief authority." We had not awakened as yet to the fulness of janitorial tyranny and power....