The value of a praying mother 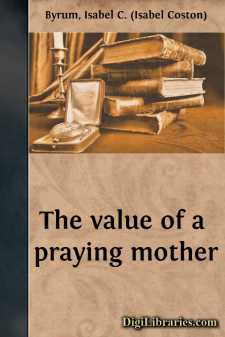 How delightful to step into the home where God is counselor of both parent and child! How blessed the companionship in such a home! There God counsels in sweet, tender tones. He teaches his will and gives the needed wisdom. God is man's truest and best teacher. James says, "If any of you lack wisdom, let him ask of God, that giveth to all men liberally ... and it shall be given him." Be the home ever so beautiful, if it is not a house of prayer, it is not a place of true happiness. Parents should often commune with the Lord; especially the mother, with her many cares and perplexities, if she would do justice to the little ones entrusted to her care.

A beautiful picture now comes to my mind—a picture of an ideal mother of olden time. She dwelt in Ramah of Palestine. Her lonely home nestled among the lonely hills. She loved to commune with the Lord, for deep in her bosom she carried a sorrow that only he could help her to bear. Her home lacked that sweet sunlight which innocent childhood brings. She longed and prayed for a little life to guide and direct in the ways of the Lord.

Once every year she went with her husband to Shiloh, where sacrifices were offered, and there publicly worshiped the Lord. When at the house of the Lord one day, she prayed long and earnestly that God would grant the desire of her heart. "O Lord of hosts," she prayed, "if thou wilt indeed look on the affliction of thine handmaid, and remember me, and not forget thine handmaid, but wilt give unto thine handmaid a man child, then I will give him unto the Lord all the days of his life, and there shall no razor come upon his head."

A scene like this must have been rare even to the priest of God; for he mistook this sad woman for one drunken with wine. She begged him not to look upon her as such. When the man of God saw by her modest, earnest words that she was not drunken as he had supposed, he changed his reproof into a blessing. "Go in peace," he said, "and the God of Israel grant thy petition that thou hast asked of him." With perfect confidence that God had heard and answered prayer, the woman arose and returned with her husband to their home in Ramah.

The next year she did not go up to Shiloh; for God had granted her petition and had given her a little son. Her husband was willing for her to remain at home, but he cautioned her not to forget her promise to the Lord. He feared, perhaps, that the mother might become so attached to her child that she would be unwilling to part with him as she had promised. His warning was unnecessary.

As soon as Samuel (for this is what the mother named her son) was old enough to be useful, she took him to the house of God and presented him to the Lord. It must have sounded to the aged priest (who soon would have to cease his work upon earth) like a voice from heaven, when the happy mother, pointing to her child, said: "For this child I prayed; and the Lord hath given me my petition which I asked of him: therefore also I have lent him to the Lord; as long as he liveth he shall be lent to the Lord."

Again the mother prays; this time not in sorrow, but from a heart filled with thanksgiving....