The Vagabond and Other Poems from Punch 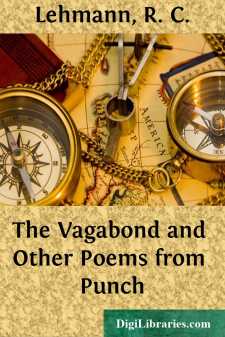 It was deadly cold in Danbury town  One terrible night in mid November,  A night that the Danbury folk rememberFor the sleety wind that hammered them down,That chilled their faces and chapped their skin,  And froze their fingers and bit their feet,And made them ice to the heart within,      And spattered and scattered      And shattered and batteredTheir shivering bodies about the street;And the fact is most of them didn't roamIn the face of the storm, but stayed at home;While here and there a policeman, stampingTo keep himself warm or sedately trampingHither and thither, paced his beat;Or peered where out of the blizzard's welterSome wretched being had crept to shelter,And now, drenched through by the sleet, a muddledBlur of a man and his rags, lay huddled.

But one there was who didn't care,Whatever the furious storm might dare,A wonderful, hook-nosed bright-eyed fellowIn a thin brown cape and a cap of yellowThat perched on his dripping coal-black hair.A red scarf set off his throat and bound him,Crossing his breast, and, winding round him,      Flapped at his flank      In a red streak dank;And his hose were red, with a purple sheenFrom his tunic's blue, and his shoes were green.He was most outlandishly patched togetherWith ribbons of silk and tags of leather,And chains of silver and buttons of stone,And knobs of amber and polished bone,And a turquoise brooch and a collar of jade,And a belt and a pouch of rich brocade,And a gleaming dagger with inlaid bladeAnd jewelled handle of burnished goldRakishly stuck in the red scarf's fold—A dress, in short, that might suit a wizard      On a calm warm day      In the month of May,But was hardly fit for an autumn blizzard.

Whence had he come there? Who could say,As he swung through Danbury town that day,  With a friendly light in his deep-set eyes,And his free wild gait and his upright bearing,  And his air that nothing could well surprise,So bright it was and so bold and daring?He might have troubled the slothful ease  Of the Great Mogul in a warlike fever;He might have bled for the Maccabees,    Or risen, spurred    By the Prophet's word,And swooped on the hosts of the unbeliever.

Whatever his birth and his nomenclature,  Something he seemed to have, some knowledge  That never was taught at school or college,But was part of his very being's nature:  Some ingrained lore that wanderers show  As over the earth they come and go,  Though they hardly know what it is they know.

And so with his head upheld he walked,  And ever the rain drove down;And now and again to himself he talked  In the streets of Danbury town.And now and again he'd stop and trollA stave of music that seemed to rollFrom the inmost depths of his ardent soul;But the wind took hold of the notes and tossed themAnd the few who chanced to be near him lost them.

So, moving on where his fancy listed,He came to a street that turned and twisted;And there by a shop-front dimly lightedHe suddenly stopped as though affrighted,Stopped and stared with his deep gaze centredOn something seen, like a dream's illusion,Through the streaming glass, mid the queer confusionOf objects littered on shelf and floor,And about the counter and by the door—And then with his lips set tight he entered....