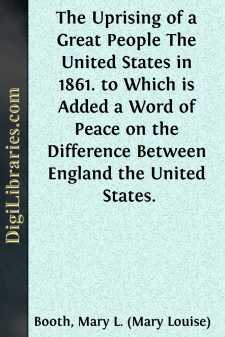 If they had not triumphed, do you know who would have gained the victory? Slavery is only a word—a vile word, doubtless, but to which we in time become habituated. To what do we not become habituated? We have stores of indulgence and indifference for the social iniquities which have found their way into the current of cotemporary civilization, and which can invoke prescription. So we have come to speak of American slavery with perfect sang froid. We are not, therefore, to stop at the word, but to go straight to the thing; and the thing is this:

Every day, in all the Southern States, families are sold at retail: the father to one, the mother to another, the son to a third, the young daughter to a fourth; and the father, the mother, the children, are scattered to the four winds of heaven; these hearts are broken, these poor beings are given a prey to infamy and sorrow, these marriages are ruptured, and adulterous unions are formed twenty leagues, a hundred leagues away, in the bosom and with the assent of a Christian community. Every day, too, the domestic slave-trade carries on its work; merchants in human flesh ascend the Mississippi, to seek in the producing States wherewith to fill up the vacuum caused unceasingly by slavery in the consuming States; their ascent made, they scour the farms of Virginia or of Kentucky, buying here a boy, there a girl; and other hearts are torn, other families are dispersed, other nameless crimes are accomplished coolly, simply, legally: it is the necessary revenue of the one, it is the indispensable supply of the others. Must not the South live, and how dares any one travesty a fact so simple? by what right was penned that eloquent calumny called "Uncle Tom's Cabin"?

A calumny! I ask how any one would set to work to calumniate the customs which I have just described. Say, then, that the laws of the South are a calumny, that the official acts of the South are a calumny; for I affirm that the simple reading of these acts and these laws, a glance at the advertisements of a Southern journal, saddens the heart more, and wounds the conscience deeper, than the most poignant pages of Mrs. Harriet Beecher Stowe. I admit willingly that there are many masters who are very kind and very good. I admit that there are some slaves who are relatively happy. I cast aside unhesitatingly the stories of exceptional cruelty; it is enough for me to see that these happy slaves expose themselves to a thousand deaths to escape a situation declared "preferable to that of our workmen." It is enough for me to hear the heart-rending cries of those women and young girls who, adjudged to the highest and last bidder, become, by the law and in a Christian country, the property, yes, the property (excuse the word, it is the true one) of the debauchees, their purchasers. And remark here that the virtues of the master are a weak guarantee: he may die, he may become bankrupt, and nothing then can hinder his slaves from being sold into the hands of the buyer who scours the country and makes his choice....