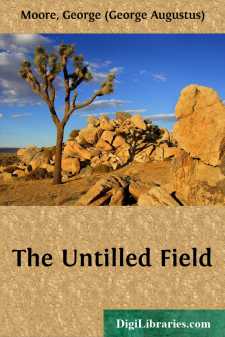 CHAPTER I IN THE CLAY

It was a beautiful summer morning, and Rodney was out of his bed at six o'clock. He usually went for a walk before going to his studio, and this morning his walk had been a very pleasant one, for yesterday's work had gone well with him. But as he turned into the mews in which his studio was situated he saw the woman whom he employed to light his fire standing in the middle of the roadway. He had never seen her standing in the middle of the roadway before and his doors wide open, and he instantly divined a misfortune, and thought of the Virgin and Child he had just finished. There was nothing else in his studio that he, cared much about. A few busts, done long ago, and a few sketches; no work of importance, nothing that he cared about or that could not be replaced if it were broken.

He hastened his steps and he would have run if he had not been ashamed to betray his fears to the char-woman.

"I'm afraid someone has been into the studio last night. The hasp was off the door when I came this morning. Some of the things are broken."

Rodney heard no more. He stood on the threshold looking round the wrecked studio. Three or four casts had been smashed, the floor was covered with broken plaster, and the lay figure was overthrown, Rodney saw none of these things, he only saw that his Virgin and Child was not on the modelling stool, and not seeing it there, he hoped that the group had been stolen, anything were better than that it should have been destroyed. But this is what had happened: the group, now a mere lump of clay, lay on the floor, and the modelling stand lay beside it.

"I cannot think," said the charwoman, "who has done this. It was a wicked thing to do. Oh, sir, they have broken this beautiful statue that you had in the Exhibition last year," and she picked up the broken fragments of a sleeping girl.

"That doesn't matter," said Rodney. "My group is gone."

"But that, sir, was only in the clay. May I be helping you to pick it up, sir? It is not broken altogether perhaps."

Rodney waved her aside. He was pale and he could not speak, and was trembling. He had not the courage to untie the cloths, for he knew there was nothing underneath but clay, and his manner was so strange that the charwoman was frightened. He stood like one dazed by a dream. He could not believe in reality, it was too mad, too discordant, too much like a nightmare. He had only finished the group yesterday!

He still called it his Virgin and Child, but it had never been a Virgin and Child in the sense suggested by the capital letters, for he had not yet put on the drapery that would convert a naked girl and her baby into the Virgin and Child. He had of course modelled his group in the nude first, and Harding, who had been with him the night before last, had liked it much better than anything he had done, Harding had said that he must not cover it with draperies, that he must keep it for himself, a naked girl playing with a baby, a piece of paganism. The girl's head was not modelled when Harding had seen it....