The Unsolved Riddle of Social Justice 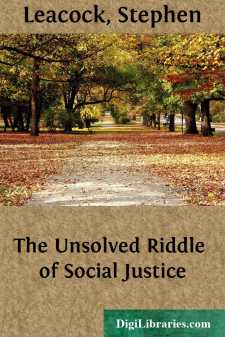 THESE are troubled times. As the echoes of the war die away the sound of a new conflict rises on our ears. All the world is filled with industrial unrest. Strike follows upon strike. A world that has known five years of fighting has lost its taste for the honest drudgery of work. Cincinnatus will not back to his plow, or, at the best, stands sullenly between his plow-handles arguing for a higher wage.

The wheels of industry are threatening to stop. The laborer will not work because the pay is too low and the hours are too long. The producer cannot employ him because the wage is too high, and the hours are too short. If the high wage is paid and the short hours are granted, then the price of the thing made, so it seems, rises higher still. Even the high wages will not buy it. The process apparently moves in a circle with no cessation to it. The increased wages seem only to aggravate the increasing prices. Wages and prices, rising together, call perpetually for more money, or at least more tokens and symbols, more paper credit in the form of checks and deposits, with a value that is no longer based on the rock-bottom of redemption into hard coin, but that floats upon the mere atmosphere of expectation.

But the sheer quantity of the inflated currency and false money forces prices higher still. The familiar landmarks of wages, salaries and prices are being obliterated. The "scrap of paper" with which the war began stays with us as its legacy. It lies upon the industrial landscape like snow, covering up, as best it may, the bare poverty of a world desolated by war.

Under such circumstances national finance seems turned into a delirium. Billions are voted where once a few poor millions were thought extravagant. The war debts of the Allied Nations, not yet fully computed, will run from twenty-five to forty billion dollars apiece. But the debts of the governments appear on the other side of the ledger as the assets of the citizens. What is the meaning of it? Is it wealth or is it poverty? The world seems filled with money and short of goods, while even in this very scarcity a new luxury has broken out. The capitalist rides in his ten thousand dollar motor car. The seven-dollar-a-day artisan plays merrily on his gramophone in the broad daylight of his afternoon that is saved, like all else, by being "borrowed" from the morning. He calls the capitalist a "profiteer." The capitalist retorts with calling him a "Bolshevik."

Worse portents appear. Over the rim of the Russian horizon are seen the fierce eyes and the unshorn face of the real and undoubted Bolshevik, waving his red flag. Vast areas of what was a fertile populated world are overwhelmed in chaos. Over Russia there lies a great darkness, spreading ominously westward into Central Europe. The criminal sits among his corpses. He feeds upon the wreck of a civilization that was.

The infection spreads. All over the world the just claims of organized labor are intermingled with the underground conspiracy of social revolution. The public mind is confused. Something approaching to a social panic appears. To some minds the demand for law and order overwhelms all other thoughts. To others the fierce desire for social justice obliterates all fear of a general catastrophe. They push nearer and nearer to the brink of the abyss. The warning cry of "back" is challenged by the eager shout of "forward!" The older methods of social progress are abandoned as too slow....