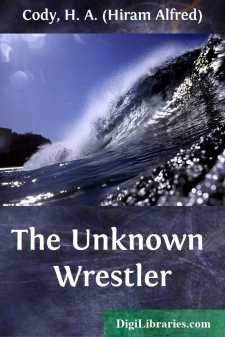 There was no room for him on the sidewalk, so he took up his position beyond the curbstone. The light from the large arc-lamp overhead, exposed the old man's thin white hair, withered face and threadbare clothes. His sightless eyes were turned toward the passing throng, and his head was slightly bent in an expectant attitude. But the hand that drew the wheezy bow across the strings of the violin often faltered, and the broken music, instead of attracting, repelled the crowds. The player was tired and longed for rest. But the fire of an overmastering purpose burned in his soul and kept him steadfast to his post.

The girl standing by his side was both weary and embarrassed. Her hand trembled as she held out her father's soft felt hat to receive the coins which were so very few. It was quite evident that she was new to this business, for her cheeks were flushed crimson owing to the remarks she occasionally heard.

"Listen to that old man sawing wood," one gaily-dressed young fop laughingly jested to his companion.

"Filing his saw, I should say," was the sarcastic reply. "It's a wonder to me that such a noise is allowed on a street like this."

"But see the girl," the other insisted, "isn't she a beauty! Look at her cheeks. My! they are some colour. She seems new to her job. Suppose we give her a jolt. I'd like to hear what she'd say. Perhaps she isn't as innocent as she seems."

They had stopped several rods away and were watching the girl as they talked. Presently they retraced their steps, and when they came near where she was standing, one of them surged suddenly against her, causing her to drop the hat in alarm and start back, while the few coins rolled out upon the hard stones. Her cry of dismay caused the old man to stop playing and turn quickly toward her.

"What is the matter, Nan?" he anxiously enquired.

"Oh, let us go away," the girl pleaded. "We are not safe here, and I am so frightened. Two men pushed against me and knocked the hat out of my hand. I know they did it on purpose, for they went away laughing. Oh, what is that?" and she leaned eagerly forward as a commotion took place among the crowd a short distance away.

While the young men were performing their cowardly prank, a man was intently watching all that was taking place. He had been observing the blind violinist and the timid girl for several minutes. In his eyes was an expression of sympathy, which changed at once to intense anger at the act of the two heartless fops. He stepped quickly forward and confronted them.

"What right had you to interfere with that girl?" he demanded.

"It's none of your business," replied the one who had done the deed. "You get out of our way, and do it quick at that, or it won't be well with you."

At once a heavy hand was laid upon his shoulder, and the gripping fingers of that hand caused him to wince and try to tear himself away. A sudden fear smote his heart as he looked up into the blazing eyes of the man before him. He was beginning to respect that towering form with the great broad shoulders and the hand that seemed to weigh a ton and the gripping fingers that were closing like a vise....