The Two Whalers Adventures in the Pacific 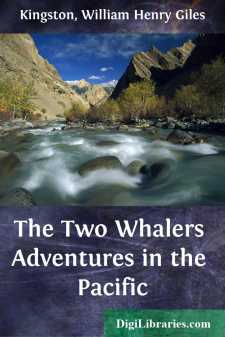 I hail from Deal, where my father was highly respected, not on account of his worldly wealth, for of that he had but small store, but because he was an honest, upright, God-fearing man, who did his duty to his neighbour, and ruled his family with discretion.

And my mother—she was a mother!—so loving and gentle and considerate; she kept us, her children, of whom there were nine, I being the third, in excellent order, and yet we scarcely discovered the means she employed. We trusted her implicitly; we knew that she entered into all our sorrows as well as into our joys and amusements. How carefully she bound up a cut finger or bathed a bruised knee; or if we were trying to manufacture any toy, how ready she was to show us the best way to do the work; how warmly she admired it when finished, and how proudly she showed it to father when he came in. I was accustomed from my earliest days to the sight of ships coming into or going out of the Downs, or brought up before our town, and I used to listen with deep interest to the account of his adventures in all parts of the world with which our neighbour, Captain Bland, was wont to entertain us when he came to our house, or when we went in to take tea with him and Mrs Bland and their daughter Mary. I can, therefore, scarcely remember the time when I did not wish to become a sailor, though as my eldest brother Bill was intended for the sea, and indeed went away when I was still a little fellow, my father had thoughts of bringing me up to some trade or other. I should have been content to follow my father’s wishes, or rather to have done what he believed best for me, had I been sent away inland, where I could not have heard nautical matters talked about, and where the sea and shipping would have been out of my sight. While I remained at home the desire grew stronger and stronger to become like the seafaring men I was constantly meeting—pilots, masters and mates, and boatmen—and I may venture to say that a finer race of sailors are nowhere to be found than those belonging to Deal.

Captain Bland was a thorough sailor. He dearly loved the sea, and the ship he commanded, and his crew—at least he took a warm interest in their welfare—but he loved his wife and daughter more, and for their sakes he remained on shore longer than he would otherwise have done. Still, he made three or four voyages while I was a youngster, and he always spoke as if he had no intention of abandoning the sea until he had laid by a competency for old age. How many a master says the same, and goes on ploughing the ocean in the delusive hope of reaping a harvest till the great reaper gathers him into his garner.

Notwithstanding my predilections in favour of a sea life, I was still undecided as to my future career, when one winter’s day, after school hours, as I was taking a run out on the London Road, I saw coming along towards me a fine broad, well-built lad, with a sun-burnt countenance, and a stick having a bundle at the end of it over his shoulder....