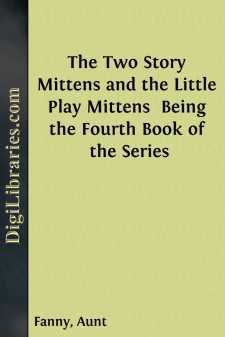 MORE ABOUT THE MITTENS.

The mittens were coming bravely on. Some evenings, Aunt Fanny could not send a story; and then the little mother read an entertaining book, or chatted pleasantly with her children.

There had been twelve pairs finished, during the reading of the third book, and several more were on the way. George had written the most delightful letters, each of which was read to his eagerly-listening sisters and brothers several times, for they were never tired of hearing about life in camp.

This evening, the mother drew another letter, received that day, out of her pocket. The very sight of the envelope, with the precious flag in the corner, caused their eyes to sparkle, and their fingers to fly at their patriotic and loving work.

"Attention!" said the mother in a severe, military tone. Everybody burst out laughing, choked it off, immediately straightened themselves up as stiff as ramrods, and she began:

"Dear Mother, Captain, and all the beloved squad:—Our camp is splendid! We call it Camp Ellsworth. It covers the westward slope of a beautiful hill. The air is pure and fresh, and our streets (for we have real ones) are kept as clean as a pin. Not an end of a cigar, or an inch of potato peeling, dare to show themselves. Directly back of the camp strong earthworks have been thrown up, with rifle pits in front; and these are manned by four artillery companies from New York. Our commissary is a very good fellow, but I wish he would buy pork with less fat. I am like the boy in school, who wrote home to his mother, his face all puckered up with disgust: "They make us eat p-h-a-t!!" When I swizzle it (or whatever you call that kind of cooking) in a pan over the fire, there is nothing left of a large slice, but a little shrivelled brown bit, swimming in about half a pint of melted lard, not quarter enough to satisfy a great robin redbreast like me; but I make the most of it, by pointing my bread for some time at it, and then eating a lot of bread before I begin at the pork. The pointing, you see, gives the bread a flavor."

The children screamed with laughter at this, and wanted to have some salt pork cooked immediately to try the "pointing" flavor. Their mother promised to have some for breakfast, and went on reading:

"We are very busy at drills. I give the boys plenty of field exercise, quick step, skirmishes, double quick, and all manner of manœuvres. After drill, we sing songs, tell jokes, and play jokes upon each other, but we don't forget, in doing this, that we are gentlemen.

"Oh dear mother, I am crazy to be in action! I am afraid, if we don't have a battle soon, I shall get motheaten. Our General is a glorious fellow, and is just as anxious as we are to have it over; peace will come all the sooner. Hollo! Here comes "Tapp," and I must blow out my half inch of tallow candle, and go to bed.

"Good-by, all my dear ones. Love and pray for your affectionate son and brother,

"Ah!" sighed the children, as the mother folded up the letter. Then they were silent, thinking of the dear brother who wanted so much to be in the dreadful battle; and the little mother was looking very mournful when there came a ring at the bell....