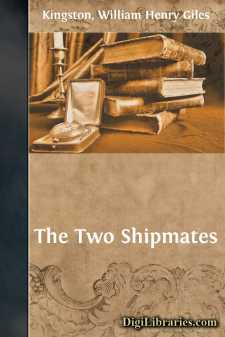 The stout trading brig Amity, Samuel Mudge master and part owner, was gliding up Plymouth Sound on a summer’s evening towards her accustomed berth in Catwater, a few years before the termination of the last war between England and France. She had no pilot on board; indeed, her crew averred that the old craft could find the way in and out of the harbour by herself; at all events, her master knew it better than most men trading from the port, as did his young mate, Ralph Michelmore.

The last rays of the setting sun were glancing on the topgallant mast-heads of the brig when her anchor was dropped, and by the time her sails were furled and all was made snug the gloom of night had settled down on the Pool, and twinkling lights began to appear from the houses on shore.

“You’ll be wishing to go on shore, my boy,” said the old master, as Ralph, the duties for the day over, came into the cabin to join him at tea, which the boy had just placed on the table. “There’ll be some one who’ll be right glad to see thee, lad;” and the speaker looked up at the mate, whose handsome countenance beamed with pleasure, a slight blush rising on it as he answered—

“Thank you, sir; thank you heartily. I should very much like to pay Mistress Treviss—and—and her granddaughter a visit. I had few opportunities of seeing them when we were last in port, and as we have been long on this trip they may be anxious about us. But would not you prefer going on shore yourself, captain? It’s my duty to remain on board.”

“No, do you go, as I tell ye,” replied the kind old master. “I’ll stay on board and look after the ship. But I say, lad, take your protection with you. The press-gangs are sure to be out, and you may chance to fall in with one of them.”

“Thank you, sir, I have it here,” said Ralph, producing a tin case from his pocket; and hurriedly swallowing his tea without sitting down, he went into his cabin to rig himself in his shore-going suit.

Ralph’s father, the commander of a merchant vessel, and an old friend and shipmate of Captain Mudge, had been lost at sea, washed from the deck in a heavy gale, leaving his wife and young child but ill provided for. The widow, a truly Christian woman, exerted herself to the utmost of her strength to support and educate her boy, but when he was about fourteen years of age her health gave way, and she died, committing him to the charge of good Captain Mudge.

Ralph, who had set his heart on going to sea, was taken as an apprentice on board the Amity the next voyage she made. By his steadiness, intelligence, and activity, he soon became a prime seaman. When on shore he studied navigation, and as soon as his time was out, Captain Mudge, the berth being vacant, made him his mate. Most of the crew heartily congratulated Ralph on his promotion, for they acknowledged him, young as he was, to be the best seaman among them. The only one who grumbled was Dick Bracewell, who had also been an apprentice on board the Amity, and being a year older than Ralph, and a very fair sailor, considered that he had superior claims to promotion....