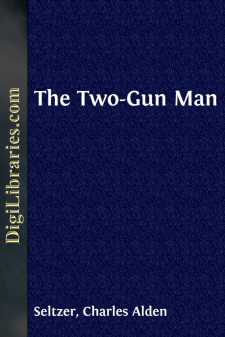 Add to My Favorites
Published: 9 years ago
Downloads: 165
Rating: (0 Votes)

CHAPTER I THE STRANGER AT DRY BOTTOM

From the crest of Three Mile Slope the man on the pony could see the town of Dry Bottom straggling across the gray floor of the flat, its low, squat buildings looking like so many old boxes blown there by an idle wind, or unceremoniously dumped there by a careless fate and left, regardless, to carry out the scheme of desolation.

Apparently the rider was in no hurry, for, as the pony topped the rise and the town burst suddenly into view, the little animal pricked up its ears and quickened its pace, only to feel the reins suddenly tighten and to hear the rider's voice gruffly discouraging haste. Therefore, the pony pranced gingerly, alert, champing the bit impatiently, picking its way over the lumpy hills of stone and cactus, but holding closely to the trail.

The man lounged in the saddle, his strong, well-knit body swaying gracefully, his eyes, shaded by the brim of his hat, narrowed with slight mockery and interest as he gazed steadily at the town that lay before him.

"I reckon that must be Dry Bottom," he said finally, mentally taking in its dimensions. "If that's so, I've only got twenty miles to go."

Half way down the slope, and still a mile and a half from the town, the rider drew the pony to a halt. He dropped the reins over the high pommel of the saddle, drew out his two guns, one after the other, rolled the cylinders, and returned the guns to their holsters. He had heard something of Dry Bottom's reputation and in examining his pistols he was merely preparing himself for an emergency. For a moment after he had replaced the weapons he sat quietly in the saddle. Then he shook out the reins, spoke to the pony, and the little animal set forward at a slow lope.

An ironic traveler, passing through Dry Bottom in its younger days, before civic spirit had definitely centered its efforts upon things nomenclatural, had hinted that the town should be known as "dry" because of the fact that while it boasted seven buildings, four were saloons; and that "bottom" might well be used as a suffix, because, in the nature of things, a town of seven buildings, four of which were saloons, might reasonably expect to descend to the very depths of moral iniquity.

The ironic traveler had spoken with prophetic wisdom. Dry Bottom was trying as best it knew how to wallow in the depths of sin. Unlovely, soiled, desolate of verdure, dumped down upon a flat of sand in a treeless waste, amid cactus, crabbed yucca, scorpions, horned toads, and rattlesnakes. Dry Bottom had forgotten its morals, subverted its principles, and neglected its God.

As the rider approached to within a few hundred yards of the edge of town he became aware of a sudden commotion. He reined in his pony, allowing it to advance at a walk, while with alert eyes he endeavored to search out the cause of the excitement. He did not have long to watch for the explanation.

A man had stepped out of the door of one of the saloons, slowly walking twenty feet away from it toward the center of the street....