The Twins of Table Mountain 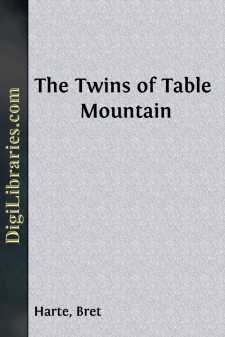 CHAPTER I. A CLOUD ON THE MOUNTAIN.

They lived on the verge of a vast stony level, upheaved so far above the surrounding country that its vague outlines, viewed from the nearest valley, seemed a mere cloud-streak resting upon the lesser hills. The rush and roar of the turbulent river that washed its eastern base were lost at that height; the winds that strove with the giant pines that half way climbed its flanks spent their fury below the summit; for, at variance with most meteorological speculation, an eternal calm seemed to invest this serene altitude. The few Alpine flowers seldom thrilled their petals to a passing breeze; rain and snow fell alike perpendicularly, heavily, and monotonously over the granite bowlders scattered along its brown expanse. Although by actual measurement an inconsiderable elevation of the Sierran range, and a mere shoulder of the nearest white-faced peak that glimmered in the west, it seemed to lie so near the quiet, passionless stars, that at night it caught something of their calm remoteness.

The articulate utterance of such a locality should have been a whisper; a laugh or exclamation was discordant; and the ordinary tones of the human voice on the night of the 15th of May, 1868, had a grotesque incongruity.

In the thick darkness that clothed the mountain that night, the human figure would have been lost, or confounded with the outlines of outlying bowlders, which at such times took upon themselves the vague semblance of men and animals. Hence the voices in the following colloquy seemed the more grotesque and incongruous from being the apparent expression of an upright monolith, ten feet high, on the right, and another mass of granite, that, reclining, peeped over the verge.

"I lost the trail, and climbed up the slide."

Here followed a stumble, the clatter of stones down the mountain-side, and an oath so very human and undignified that it at once relieved the bowlders of any complicity of expression. The voices, too, were close together now, and unexpectedly in quite another locality.

Notwithstanding this exclamation, the interest of the latter speaker was evidently only polite and perfunctory. What, indeed, were the political convulsions of the Old World to the dwellers on this serene, isolated eminence of the New?

"I reckon it's so," continued the first voice. "French Pete and that thar feller that keeps the Dutch grocery hev hed a row over it; emptied their six-shooters into each other. The Dutchman's got two balls in his leg, and the Frenchman's got an onnessary buttonhole in his shirt-buzzum, and hez caved in."

This concise, local corroboration of the conflict of remote nations, however confirmatory, did not appear to excite any further interest. Even the last speaker, now that he was in this calm, dispassionate atmosphere, seemed to lose his own concern in his tidings, and to have abandoned every thing of a sensational and lower-worldly character in the pines below....