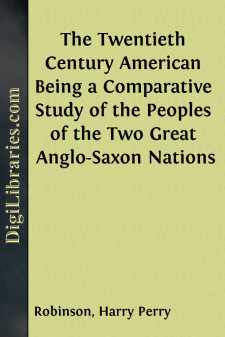 If I can say anything to show that my name is really Makepeace, and to increase the source of love between the two countries, then please, God, I will."—W. M. Thackeray, in Letters to an American Family.

"Certainly there is nothing like England, and there never has been anything like England in the world. Her wonderful history, her wonderful literature, her beautiful architecture, the historic and poetic associations which cluster about every street and river and mountain and valley, her vigorous life, the sweetness and beauty of her women, the superb manhood of her men, her Navy, her gracious hospitality, and her lofty pride—although some single race of men may have excelled her in some single particular—make up a combination never equalled in the world."—The late United States Senator Hoar, in An Autobiography of Seventy Years.

"The result of the organisation of the American colonies into a state, and of the bringing together of the diverse communities contained in these colonies, was the creation not merely of a new nation, but of a new temperament. How far this temperament was to arise from a change of climate, and how far from a new political organisation, no one could then foresee, nor is its origin yet fully analysed; but the fact itself is now coming to be more and more recognised. It may be that Nature said at about that time: 'Thus far the English is my best race; but we have had Englishmen enough; now for another turning of the globe, and for a further novelty. We need something with a little more buoyancy than the Englishman; let us lighten the structure, even at some peril in the process. Put in one drop more of nervous fluid and make the American.' With that drop, a new range of promise opened on the human race, and a lighter, finer, more highly organised type of mankind was born."—Thomas Wentworth Higginson, Atlantic Monthly, 1886.

"The foreign observer in America is at once struck by the fact that the average of intelligence, as that intelligence manifests itself in the spirit of inquiry, in the interest taken in a great variety of things, and in alertness of judgment, is much higher among the masses in the United States than anywhere else. This is certainly not owing to any superiority of the public school system in this country—or, if such superiority exists, not to that alone—but rather to the fact that in the United States the individual is constantly brought into interested contact with a greater variety of things and is admitted to active participation in the exercise of functions which in other countries are left to the care of a superior authority. I have frequently been struck by the remarkable expansion of the horizon effected by a few years of American life, in the minds of immigrants who had come from somewhat benighted regions, and by the mental enterprise and keen discernment with which they took hold of problems to which, in their comparatively torpid condition in their native countries, they had never given thought. It is true that in the large cities with congested population, self-government as an educator does not always bring the most desirable results, partly owing to the circumstance that government, in its various branches, is there further removed from the individual, so that he comes into contact with it and exercises his influence upon it only through various, and sometimes questionable, intermediary agencies which frequently exert a very demoralising influence."—Carl Schurz's Memoirs, II, 79....