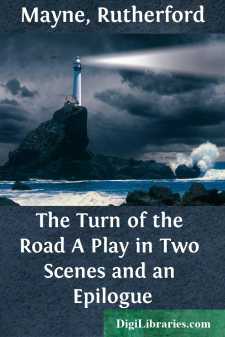 THE TURN OF THE ROAD. SCENE I.

A farm kitchen of the present day. Door at back, opening to yard, and window with deal table on which are lying dishes and drying cloths with basin of water. A large crock under table. A dresser with crockery, etc., stands near to another door which opens into living rooms. Opposite there is a fireplace with projecting breasts, in which a turf fire is glowing. Time, about eight of a summer evening in July. Mrs. Granahan and Ellen are engaged at table washing and drying the plates after the supper. Thomas Granahan, the grandfather, is seated at fire place and has evidently just finished his stirabout. The strains of a quaint folk-air played on a violin, sound faintly from the inner room.

Is that the whole of them now Ellen?

Yes that's all now but one.

She goes across to grandfather and lifts the plate.

Have you finished granda?

Yes dearie I have done.

He pauses and fumbles for his pipe, &c.

Is'nt that a fiddle I'm hearing?

Yes. Robbie's playing the fiddle in the low room.

Mrs. Granahan. Arranging plates on dresser and turning round.

I wish some one would stop that boy's fool nonsense wi' his fiddle. He's far too fond o' playin'. It would stand him better to mind his work.

Oh, let the boy be, mother. Its the first time I've heard him at it this week.

Och aye. Let the boy enjoy himself. You're only young wanst you know, Mary.

I think it must be a great thing to be a great musician. Sometimes I believe Robbie should try his luck with that fiddle of his. Somehow I know—I feel he is a genius at it.

What notions you do have to be sure. To think of a big grown man like Robbie John spending his life-time at an old fiddle.

Blathers and nonsense. Its time that boy was out lookin' at the cattle.

Are you there Robbie?

From without. The fiddle ceases suddenly and he comes and stands with it in his hand at the door.

You'd better go down to the low field and see the cattle haven't broken through into Aura Boyd's corn. You couldn't keep them beasts in when the flies gets at them.

Just one second till I try this again.

Now, will you go when I tell you. You and your ould fiddle. It'll be the death of you yet. Mind what I say.

Robbie John. Coming through door and standing there.

Bad cess to the cattle and Aura Boyd.

He's a cross grained man right enough, but it wouldn't do to have the cattle trampin' and eatin' his corn.

I was down there only ten minutes ago when you sent me, and they were eatin' there quite peaceable.

Now will you go Robbie John when your mother wants you. Aura Boyd sent over here this forenoon to say if that Kerry cow broke into his field again he'd have the law agin us.

Och, he's a cross ould cratur. Sure, she had only one foot through the hedge when he turned her....