The Truth about Jesus : Is He a Myth? 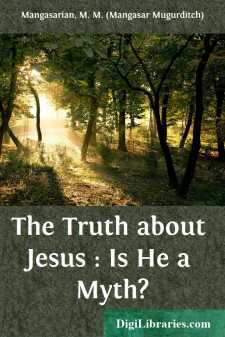 I am today twenty-five hundred years old. I have been dead for nearly as many years. My place of birth was Athens; my grave was not far from those of Xenophon and Plato, within view of the white glory of Athens and the shimmering waters of the Aegean sea.

After sleeping in my grave for many centuries I awoke suddenly—I cannot tell how nor why—and was transported by a force beyond my control to this new day and this new city. I arrived here at daybreak, when the sky was still dull and drowsy. As I approached the city I heard bells ringing, and a little later I found the streets astir with throngs of well dressed people in family groups wending their way hither and thither. Evidently they were not going to work, for they were accompanied by their children in their best clothes, and a pleasant expression was upon their faces.

"This must be a day of festival and worship, devoted to one of their gods," I murmured to myself.

Looking about me I saw a gentleman in a neat black dress, smiling, and his hand extended to me with great cordiality. He must have realized I was a stranger and wished to tender his hospitality to me. I accepted it gratefully. I clasped his hand. He pressed mine. We gazed for a moment silently into each other's eyes. He understood my bewilderment amid my novel surroundings, and offered to enlighten me. He explained to me the ringing of the bells and the meaning of the holiday crowds moving in the streets. It was Sunday—Sunday before Christmas, and the people were going to "the House of God."

"Of course you are going there, too," I said to my friendly guide.

"A priest of Apollo?" I interrogated.

"No, no," he replied, raising his hand to command silence, "Apollo is not a god; he was only an idol."

"An idol?" I whispered, taken by surprise.

"I perceive you are a Greek," he said to me, "and the Greeks," he continued, "notwithstanding their distinguished accomplishments, were an idolatrous people. They worshipped gods that did not exist. They built temples to divinities which were merely empty names—empty names," he repeated. "Apollo and Athene—and the entire Olympian lot were no more than inventions of the fancy."

"But the Greeks loved their gods," I protested, my heart clamoring in my breast.

"They were not gods, they were idols, and the difference between a god and an idol is this: an idol is a thing; God is a living being. When you cannot prove the existence of your god, when you have never seen him, nor heard his voice, nor touched him—when you have nothing provable about him, he is an idol. Have you seen Apollo? Have you heard him? Have you touched him?"

I had to admit that I did not.

"But many of us Greeks," I said, "have felt Apollo in our hearts and have been inspired by him."

"You imagine you have," returned my guide. "If he were really divine he would be living to this day."