The Truth About America 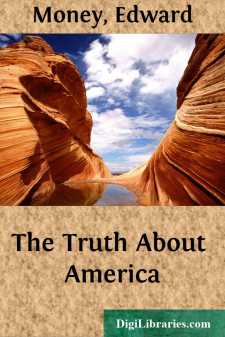 part from the object with which most authors write, viz. to make money, I purpose this little book to serve three objects.

Firstly, to make the United States of America, and the Americans, better known than they are at present to the mass of the English public.

Secondly, to put a certain class of emigrants on their guard against the machinations of a few agents in London, who victimize them not a little.

Thirdly, to let the many who suffer from pulmonary diseases in Europe know that across the Atlantic is a cure-place excelling, owing to its peculiar climate, any in the Eastern hemisphere.

That my own knowledge of the United States is a superficial one, I admit in stating I was there not quite five months. If I have a talent for anything, it is the power of absorbing facts and describing them later. I kept no journal in America, but I made copious notes of all I saw and heard while the impressions were fresh. As I view all these in a bundle on the table before me, I feel that I must describe succinctly, to bring all I have to say into a "little book," and there are weighty reasons, with me at least, why it should be no more.

As my book will be truthfully written, and my intentions are good, success will not elevate me much, blame will not depress me. If the book is a fair picture, as far as it goes, of a vast and wonderful tract on the earth's surface, if it shows clearly the prevailing characteristics of the Americans, what there is for us (the English) to copy, what to avoid, if it prove of use to the ever-increasing class of emigrants, and if it is readable and amusing withal, I shall be more than satisfied.

I affirm that the United States and its denizens are not more than superficially known to English men and women. I beg the question. Why is it? There are doubtless many books of American travel, politics, descriptions, and what not. I had read many of these, but surprised as I was on much I encountered after arrival, I was far more surprised how little what I had read had prepared me to find. The following may in some degree explain this. By far the larger number who go to the States are of two classes. 1. The rich, who go for travel, pleasure, and change. 2. The emigrant, who is poor, and who stays there. The first, naturally, see the best side of everything, and if they describe their experiences, the pictures drawn are scarcely fair ones. The second class, as a rule, it goes without saying, are not strong with their pens, and were it otherwise, having to win the bread of life, they have no leisure. There are of course exceptions. The political aspect of America has been well depicted, the features of that huge continent aptly described in several books by good authors, but of true social pictures there are few. Among these there are no better than what Dickens wrote in "Martin Chuzzlewit," for the types there discussed are truly painted with great humour, the only fear is the reader thereof may conceive they are national, instead of what they truly are, characteristic of a large class.

The Americans know us far better than we know them. While, including emigrants, more pass from Great Britain to the States than America sends eastward, the proportion in visitors is certainly American. They come in shoals to England and Europe, returning generally the same year. Not strange, therefore, that their knowledge of our habits and customs exceeds ours of theirs. That the Americans know this is so, is shown by the style of conversation held with a "Britisher," when by chance (if he does not show it otherwise) his nationality is discovered....