The True Story of Our National Calamity of Flood, Fire and Tornado 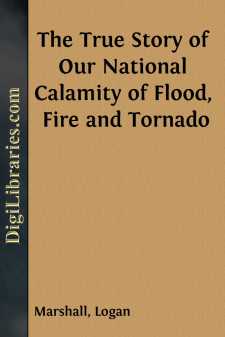 CHAPTER I The Greatest Cataclysm in American History

THE UNCONTROLLABLE FORCES OF NATURE—THE DEVASTATION OF OMAHA—THE TERROR OF THE FLOOD—A VIVID PICTURE OF THE FLOOD—THE TRAGEDY OF DEATH AND SUFFERING—THE SYMPATHY OF NATIONS—THE COURAGE OF THE STRICKEN—MEN THAT SHOWED THEMSELVES HEROES.

Man is still the plaything of Nature. He boasts loudly of conquering it; the earth gives a little shiver and his cities collapse like the house of cards a child sets up. A French panegyrist said of our own Franklin: "He snatched the scepter from tyrants and the lightning from the skies," but the lightning strikes man dead and consumes his home. He thinks he has mastered the ocean, but the records of Lloyds refute him. He declares his independence of the winds upon the ocean, and the winds upon the land touch his proud constructions and they are wrecks.

He imprisons the waters behind a dam and fetters the current of the rivers with bridges; they bestir themselves and the fetters snap, his towns are washed away and thousands of dead bodies float down the angry torrents. He burrows into the skin of the earth for treasure, and a thousand men find a living grave. Man has extorted many secrets from Nature; he can make a little use of a few of its forces; but he is impotent before its power.

Thus we pause to reflect upon the most staggering and tragic cataclysm of Nature that has been visited upon our country since first our forefathers won it from the Indian—the unprecedented succession of tornadoes, floods, storms and blizzards, which in March, 1913, devastated vast areas of territory in Ohio, Indiana, Nebraska and a dozen other states, and which were followed fast by the ravages of fire, famine and disease.

THE DEVASTATION OF OMAHA

The terrible suddenness and irresistible power of such catastrophes make them an object of overwhelming fear. The evening of Easter Sunday in Omaha was doubtless as placid and uneventful as a thousand predecessors, until an appalling roar and increasing darkness announced to the initiated the approach of a tornado, and in a few minutes forty-seven city blocks were leveled to the ground. The fairest and best built part of the city could no more withstand this awful force than the weakest hovels. Twelve hundred buildings were destroyed, most of them homes, but among them many churches and school houses. The just and the unjust fared alike in this riot of destruction and then the tornado rushed on to find other objects on which to wreck its force in Council Bluffs and elsewhere. It left in its wake many fires, but fortunately also a heavy rain, while later a deep fall of snow covered up the scene of its awful destruction.

THE TERROR OF THE FLOOD

With the rest of the country, fair Dayton sorrowed for Omaha. Two days later Omaha, bowed and almost broken by her own misfortune, looked with sympathy across to Dayton, whose woe was even greater. A thousand communities in the United States read the story and in their own sense of security sent eager proffers of assistance to the striken districts....