The true story of Christopher Columbus, called the Great Admiral 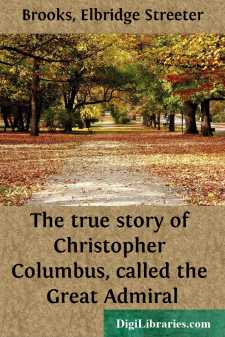 CHAPTER I. BOY WITH AN IDEA.

Men who do great things are men we all like to read about. This is the story of Christopher Columbus, the man who discovered America. He lived four hundred years ago. When he was a little boy he lived in Genoa. It was a beautiful city in the northwestern part of the country called Italy. The mountains were behind it; the sea was in front of it, and it was so beautiful a place that the people who lived there called it "Genoa the Superb." Christopher Columbus was born in this beautiful city of Genoa in the year 1446, at number 27 Ponticello Street. He was a bright little fellow with a fresh-looking face, a clear eye and golden hair. His father's name was Domenico Columbus; his mother's name was Susanna. His father was a wool-comber. He cleaned and straightened out the snarled-up wool that was cut from the sheep so as to make it ready to be woven into cloth.

Christopher helped his father do this when he grew strong enough, but he went to school, too, and learned to read and write and to draw maps and charts. These charts were maps of the sea, to show the sailors where they could steer without running on the rocks and sand, and how to sail safely from one country to another.

This world was not as big then as it is now—or, should say, people did not know it was as big. Most of the lands that Columbus had studied about in school, and most of the people he had heard about, were in Europe and parts of Asia and Africa. The city of Genoa where Columbus lived was a very busy and a very rich city. It was on the Mediterranean Sea, and many of the people who lived there were sailors who went in their ships on voyages to distant lands. They sailed to other places on the Mediterranean Sea, which is a very large body of water, you know, and to England, to France, to Norway, and even as far away as the cold northern island of Iceland. This was thought to be a great journey.

The time in which Columbus lived was not as nice a time as is this in which you live. People were always quarreling and fighting about one thing or another, and the sailors who belonged to one country would try to catch and steal the ships or the things that belonged to the sailors or the storekeepers of another country. This is what we call piracy, and a pirate, you know, is thought to be a very wicked man.

But when Columbus lived, men did not think it was so very wicked to be a sort of half-way pirate, although they did know that they would be killed if they were caught. So almost every sailor was about half pirate. Every boy who lived near the seashore and saw the ships and the sailors, felt as though he would like to sail away to far-off lands and see all the strange sights and do all the brave things that the sailors told about. Many of them even said they would like to be pirates and fight with other sailors, and show how strong and brave and plucky they could be.

Columbus was one of these. He was what is called an adventurous boy. He did not like to stay quietly at home with his father and comb out the tangled wool....