The True Legend of St. Dunstan and the Devil 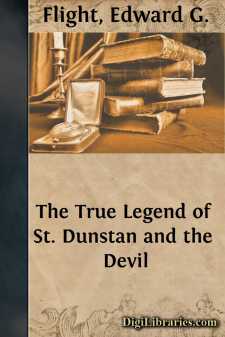 PREFACE TO THE SECOND EDITION.

HE success of the first edition of this little work, compels its author to say a few words on the issue of a second. "Expressive silence" would now be in him the excessive impudence of not acknowledging, as he respectfully does acknowledge, that success to be greatly ascribable to the eminent artists who have drawn and engraved the illustrations.

"A man's worst wish for his enemy is that he might write a book," is a generally-received notion, of whose accuracy it is hoped there is no impertinence in suggesting a doubt. To reflect on having contributed, however slightly, to the innocent amusement of others, without giving pain to any, is alone an enjoyment well worth writing for. But when even so unpretending a trifle as this is, can, besides, bring around its obscure author fresh and valuable friendships, the hackneyed exclamation would appear more intelligible if rendered thus: "Oh, that my friend would write a book!"

In former days, possibly, things may have been very different from what they now are. Haply, the literary highway may, heretofore, have been not particularly clean, choked with rubbish, badly drained, ill lighted, not always well paved even with good intentions, and beset with dangerous characters, bilious-looking Thugs, prowling about, ready to pounce upon, hocus, strangle, and pillage any new arrival. But all that is now changed. Now, the path of literature is all velvet and roses. The race of quacks and impostors has become as extinct, as are the saurian and the dodo; and every honest flourisher of the pen, instead of being tarred and feathered, is hailed as a welcome addition to "the united happy family"—of letters.

Much of this agreeable change is owing to the improvement of the literary police, which is become a respectable, sober, well-conducted body of men, who seldom go on duty as critics, without a horse-shoe. Much is owing to the propagation of the doctrines of the Peace Society, even among that species of the genus irritabile, authors themselves, who have at last learned

"That brother should not war with brother

And worry and devour each other;

But sing and shine by sweet consent

Chiefly, however, is the happy change attributable to the discriminating and impartial judgment of the reading public of this golden Victorian era. In the present day, it may be considered a general rule, that no picture is admired, no book pronounced readable, no magazine or newspaper circulated, unless in each case it develope intrinsic merit. The mere name of the artist, or author, or editor, has not the slightest weight with our present intelligent, discriminating community, who are never enslaved, or misled, by whim, caprice, or fashion. It has been said, but it seems too monstrous for belief, that, formerly, persons were actually to be found so extremely indolent, or stupid, or timid, as never to think for themselves; but who followed with the crowd, like a swarm of bees, to the brazen tinkle of a mere name!...