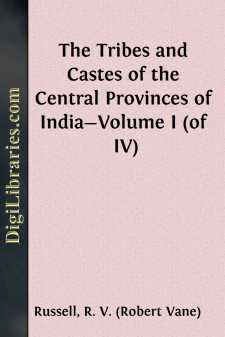 The territory controlled by the Chief Commissioner of the Central Provinces and Berar has an area of 131,000 square miles and a population of 16,000,000 persons. Situated in the centre of the Indian Peninsula, between latitudes 17°47' and 24°27' north, and longitudes 76° and 84° east, it occupies about 7.3 per cent of the total area of British India. It adjoins the Central India States and the United Provinces to the north, Bombay to the west, Hyderabad State and the Madras Presidency to the south, and the Province of Bihar and Orissa to the east. The Province was constituted as a separate administrative unit in 1861 from territories taken from the Peshwa in 1818 and the Maratha State of Nagpur, which had lapsed from failure of heirs in 1853. Berar, which for a considerable previous period had been held on a lease or assignment from the Nizam of Hyderabad, was incorporated for administrative purposes with the Central Provinces in 1903. In 1905 the bulk of the District of Sambalpur, with five Feudatory States inhabited by an Uriya-speaking population, were transferred to Bengal and afterwards to the new Province of Bihar and Orissa, while five Feudatory States of Chota Nagpur were received from Bengal. The former territory had been for some years included in the scope of the Ethnographic Survey, and is shown coloured in the annexed map of linguistic and racial divisions.

The main portion of the Province may be divided, from north-west to south-east, into three tracts of upland, alternating with two of plain country. In the north-west the Districts of Sangor and Damoh lie on the Vindhyan or Malwa plateau, the southern face of which rises almost sheer from the valley of the Nerbudda. The general elevation of this plateau varies from 1500 to 2000 feet. The highest part is that immediately overhanging the Nerbudda, and the general slope is to the north, the rivers of this area being tributaries of the Jumna and Ganges. The surface of the country is undulating and broken by frequent low hills covered with a growth of poor and stunted forest. The second division consists of the long and narrow valley of the Nerbudda, walled in by the Vindhyan and Satpura hills to the north and south, and extending for a length of about 200 miles from Jubbulpore to Handia, with an average width of twenty miles. The valley is situated to the south of the river, and is formed of deep alluvial deposits of extreme richness, excellently suited to the growth of wheat. South of the valley the Satpura range or third division stretches across the Province, from Amarkantak in the east (the sacred source of the Nerbudda) to Asirgarh in the Nimar District in the west, where its two parallel ridges bound the narrow valley of the Tapti river. The greater part consists of an elevated plateau, in some parts merely a rugged mass of hills hurled together by volcanic action, in others a succession of bare stony ridges and narrow fertile valleys, in which the soil has been deposited by drainage....