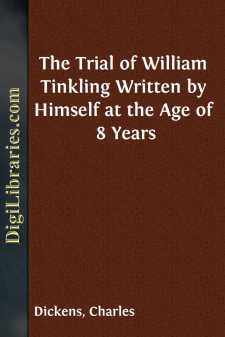 The story contained herein was written by Charles Dickens in 1867. It is the first of four stories entitled "Holiday Romance" and was published originally in a children's magazine in America. It purports to be written by a child aged eight. It was republished in England in "All the Year Round" in 1868. For this and four other Christmas pieces Dickens received £1,000.

"Holiday Romance" was published in book form by Messrs Chapman & Hall in 1874, with "Edwin Drood" and other stories.

For this reprint the text of the story as it appeared in "All the Year Round" has been followed.

THE TRIAL OF WILLIAM TINKLING

Nettie Ashford is my Bride. We were married in the right-hand closet in the corner of the dancing-school where first we met, with a ring (a green one) from Wilkingwater's toy-shop. I owed for it out of my pocket-money. When the rapturous ceremony was over, we all four went up the lane and let off a cannon (brought loaded in Bob Redforth's waistcoat-pocket) to announce our nuptials. It flew right up when it went off, and turned over. Next day, Lieutenant-Colonel Robin Redforth was united, with similar ceremonies, to Alice Rainbird. This time the cannon bust with a most terrific explosion, and made a puppy bark.

My peerless Bride was, at the period of which we now treat, in captivity at Miss Grimmer's. Drowvey and Grimmer is the partnership, and opinion is divided which is the greatest Beast. The lovely bride of the Colonel was also immured in the Dungeons of the same establishment. A vow was entered into between the Colonel and myself that we would cut them out on the following Wednesday, when walking two and two.

Under the desperate circumstances of the case, the active brain of the Colonel, combining with his lawless pursuit (he is a Pirate), suggested an attack with fireworks. This however, from motives of humanity, was abandoned as too expensive.

Lightly armed with a paper-knife buttoned up under his jacket, and waving the dreaded black flag at the end of a cane, the Colonel took command of me at 2 P.M. on the eventful and appointed day. He had drawn out the plan of attack on a piece of paper which was rolled up round a hoop-stick. He showed it to me. My position and my full-length portrait (but my real ears don't stick out horizontal) was behind a corner-lamp-post, with written orders to remain there till I should see Miss Drowvey fall. The Drowvey who was to fall was the one in spectacles, not the one with the large lavender bonnet. At that signal I was to rush forth, seize my Bride, and fight my way to the lane....