The Tree of Appomattox 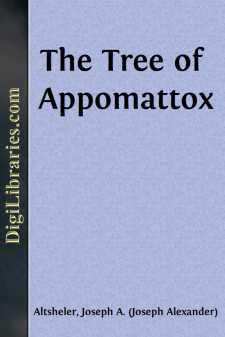 CHAPTER I THE APPLE TREE

Although he was an officer in full uniform he was a youth in years, and he had the spirits of youth. Moreover, it was one of the finest apple trees he had ever seen and the apples hung everywhere, round, ripe and red, fairly asking to be taken and eaten. Dick Mason looked up at them longingly. They made him think of the orchards at home in his own state, and a touch of coolness in the air sharpened his appetite for them all the more.

"If you want 'em so badly, Dick," said Warner, "why don't you climb the tree and get 'em? There's plenty for you and also for Pennington and me."

"I see. You're as anxious for apples as I am, and you wish me to gather 'em for you by making a strong appeal to my own desires. It's your clever New England way."

"We're forbidden to take anything from the people, but it won't hurt to keep a few apples from rotting on the ground. If you won't get 'em Pennington will."

"I understand you, George. You're trying to play Frank against me, while you keep yourself safe. You'll go far. Never mind. I'll gather apples for us all."

He leaped up, caught the lowest bough, swung himself lightly into the fork, and then climbing a little higher, reached for the reddest and ripest apples, which he flung down in a bountiful supply.

"Now, gluttons," he said, "satiate yourselves, but save a lot for me."

Then he went up as far as the boughs would sustain him and took a look over the country. Apple trees do not grow very tall, but Dick's tree stood on the highest point in the orchard, and he had a fine view, a view that was in truth the most remarkable the North American continent had yet afforded.

He always carried glasses over his shoulder, and lately Colonel Winchester had made him a gift of a splendid pair, which he now put into use, sweeping the whole circle of the horizon. With their powerful aid he was able to see the ancient city of Petersburg, where Lee had thrown himself across Grant's path in order to block his way to Richmond, the Southern capital, and had dug long lines of trenches in which his army lay. It was Lee who first used this method of defense for a smaller force against a larger, and the vast trench warfare of Europe a half century later was a repetition of the mighty struggle of Lee and Grant on the lines of Petersburg.

Dick through his glasses saw the trenches, lying like a brown bar across the green country, and opposite them another brown bar, often less than a hundred yards away, which marked where the Northern troops also had dug in. The opposing lines extended a distance of nearly forty miles, and Richmond was only twenty miles behind them. It was the nearest the Army of the Potomac had come to the Southern capital since McClellan had seen the spires of its churches, and that was more than two years away.

Warner and Pennington were lying on the ground, eating big red apples with much content and looking up lazily at Mason.

"You're curving those glasses about a lot. What do you see, Dick?" asked Pennington at length....