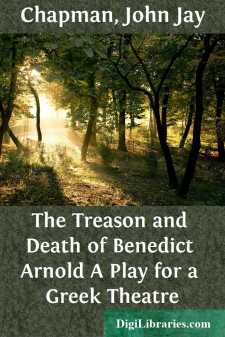 TREASON AND DEATH OF BENEDICT ARNOLD ACT I

The margin of the Hudson at West Point. Fort Putnam and the Highlands in the distance. A flag is fluttering on the fort. The orchestra represents the level of the river shore, upon which level the Chorus will enter. The characters of the drama appear on a bank or platform, slightly raised above the orchestra and Chorus. At the opening of the play Father Hudson is upon the scene. He reclines in the centre of the stage in the attitude of a river-god. The nook or couch in which he rests is situated between the two levels, as it were in an angle of the river bank. His position is such that he can, by turning his head, either watch the personages on the stage, or address the Chorus on the river margin. He is so painted and disposed as not to attract attention when the play opens, but to appear rather as a part of the scenery and decoration.

First Picket. Uneasy has been my watch. Dark have been my forebodings, standing first on one foot and then on the other, through the night hours, preyed upon by visions, holding my eyelids open by my will, while strange thoughts like vultures over their carrion, wheeling about above me, assail me, tear me with their beaks and talons. Dark looms the cloud bank through the black portals of the river. The fog holds the bleared eyes of the morning. And I, stiff with watching, suspect some evil. Some foul play is in the mountains, stalking in the shadows of the dawn. Would God the releasing trumpet would blow and the flag flutter on the mountain side, and that I might find all well! General Washington is on a journey. Would God he were returned! [The sound of a bugle is heard.] Blow, blessed bugle! Blow to the rising Sun! Blow to the dayspring of Liberty, to the new nation rising calmly above the dangers that beset her dawn. Blow bugle, and scatter the night-thoughts of terror!

[Enter the relieving Picket.] Who goes there?

Second Picket. A friend and thy relief.  Our post is changed;  The pickets are extended up the hills,  And this low post abandoned.

First Picket. That is strange,  To leave the river front without a watch!  If we expect attack, attack must come  Along the river,——

Father Hudson. Daughters of the sky, ye clouds of the morning,  Replenishers of my veins, ye purple, wandering clouds!  And you, ye waves that lap my feet, far-traveling,      restless, endlessly moving!  Thralls of the circling ocean, waves of the sea—  Attend your Father Hudson, the Ageless, the Majestic!  Calling to you, his sons and daughters, summoning you at his need.  Stoop, daughters of ether, ye clouds of the mountains!  Rise, sons of the sea, most ancient retainers,  Flow towards your father's need! the River calls—  Father Hudson summons his children.

[Enter simultaneously Chorus of Waves, (men) on one side, and on the other, Chorus of Clouds (women). They flock slowly into the orchestra, approaching each other, and sing as they assemble.]