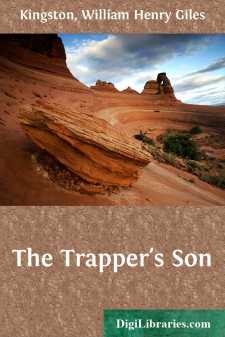 In the far western wilds of North America, over which the untutored red-skinned savage roams at liberty, engaged throughout life in war or the chase, by the side of a broad stream which made its way towards a distant lake, an old man and a boy reclined at length beneath a wigwam, roughly formed of sheets of birch-bark placed against several poles stuck in the ground in a circular form, and fastened together at the top. The sun was just rising above a wood, composed of maple, birch, poplar, and willow, fringing the opposite bank of the river; while rocky hills of no great elevation formed the sides of the valley, through which the stream made its way. Snow rested on the surrounding heights, and the ground was crisp with frost. The foliage which still clung to the deciduous trees exhibited the most gorgeous colours, the brightest red, pink, yellow, and purple tints contrasting with the sombre hues of the pines covering the lower slopes of the hills.

“It’s time to look to the traps, Laurence,” said the old man, arousing his young companion, who was still asleep by the side of the smouldering embers of their fire.

The boy sat up, and passed his hand across his eyes. There was a weary expression in his intelligent and not unpleasing countenance.

“Yes, father, I am ready,” he answered. “But I did not think the night was over; it seems but just now I lay down to sleep.”

“You have had some hard work lately, and are tired; but the season will soon be over, and we will bend our steps to Fort Elton, where you can remain till the winter cold has passed away. If I myself were to spend but a few days shut up within the narrow limits of such a place, I should soon tire of idleness, and wish to be off again among the forests and streams, where I have passed so many years.”

“Oh, do not leave me among strangers, father,” exclaimed the boy, starting to his feet. “I am rested now, and am ready.”

They set out, proceeding along the side of the stream, stopping every now and then to search beneath the overhanging bushes, or in the hollows of the bank, where their traps had been concealed. From the first the old trapper drew forth an animal about three feet in length, of a deep chestnut colour, with fine smooth glossy hair, and a broad flat tail nearly a foot long, covered with scales. Its hind feet were webbed, its small fore-paws armed with claws, and it had large, hard, sharp teeth in its somewhat blunted head. Hanging up the beaver, for such it was, to a tree, they continued the examination of their snares.

“Who would have thought creatures so easily caught could make such a work as this?” observed the old man, as they were passing over a narrow causeway which formed a dam across a smaller stream falling into the main river, and had created a back water or shallow lake of some size. The dam was composed of innumerable small branches and trunks of trees, laid horizontally across the stream, mixed with mud and stones. Several willows and small poplars were sprouting up out of it....