The Transvaal from Within A Private Record of Public Affairs 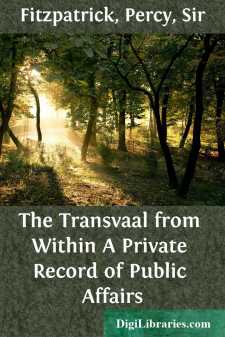 CHAPTER I. IN EARLIER DAYS.

When, before resorting to extreme measures to obtain what the Uitlanders deemed to be their bare rights, the final appeal or declaration was made on Boxing Day, 1895, in the form of the manifesto published by the Chairman of the National Union, President Kruger, after an attentive consideration of the document as translated to him, remarked grimly: 'Their rights. Yes, they'll get them—over my dead body!' And volumes of explanation could not better illustrate the Boer attitude and policy towards the English-speaking immigrants.

'L'État c'est moi' is almost as true of the old Dopper President as it was of its originator; for in matters of external policy and in matters which concern the Boer as a party the President has his way as surely and as completely as any anointed autocrat. To anyone who has studied the Boers and their ways and policy—who has given more than passing consideration to the incidents and negotiations of the present year—it must be clear that President Kruger does something more than represent the opinion of the people and execute their policy: he moulds them in the form he wills. By the force of his own strong convictions and prejudices, and of his indomitable will, he has made the Boers a people whom he regards as the germ of the Africander nation; a people chastened, selected, welded, and strong enough to attract and assimilate all their kindred in South Africa, and then to realize the dream of a Dutch Republic from the Zambesi to Capetown.

In the history of South Africa the figure of the grim old President will loom large and striking—picturesque, as the figure of one who by his character and will made and held his people; magnificent, as one who in the face of the blackest fortune never wavered from his aim or faltered in his effort; who, with a courage that seemed, and still seems, fatuous, but which may well be called heroic, stood up against the might of the greatest empire in the world. And, it may be, pathetic, too, as one whose limitations were great, one whose training and associations—whose very successes—had narrowed, and embittered and hardened him; as one who, when the greatness of success was his to take and to hold, turned his back on the supreme opportunity, and used his strength and qualities to fight against the spirit of progress, and all that the enlightenment of the age pronounces to be fitting and necessary to good government and a healthy State.

To an English nobleman, who, in the course of an interview, remarked, 'My father was a Minister of England, and twice Viceroy of Ireland,' the old Dutchman answered, 'And my father was a shepherd!' It was not pride rebuking pride; it was the ever-present fact which would not have been worth mentioning but for the suggestion of the antithesis. He too was a shepherd, and is—a peasant. It may be that he knows what would be right and good for his people, and it may be not; but it is sure that he realizes that to educate would be to emancipate, to broaden their views would be to break down the defences of their prejudices, to let in the new leaven would be to spoil the old bread, to give unto all men the rights of men would be to swamp for ever the party which is to him greater than the State....