The Translations of Beowulf A Critical Bibliography 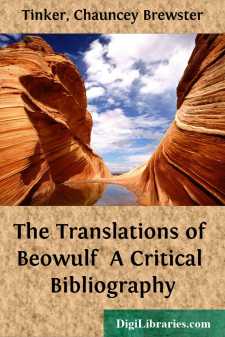 The following pages are designed to give a historical and critical account of all that has been done in the way of translating Beowulf from the earliest attempts of Sharon Turner in 1805 down to the present time. As a corollary to this, it presents a history of the text of the poem to the time of the publication of Grein’s Bibliothek der angelsächsischen Poesie in 1859; for until the publication of this work every editor of the poem was also its translator.

It is hoped that the essay may prove useful as a contribution to bibliography, and serve as a convenient reference book for those in search of information regarding the value of texts and translations of Beowulf.

The method of treating the various books is, in general, the same. I have tried to give in each case an accurate bibliographical description of the volume, a notion of the value of the text used in making it, &c. But the emphasis given to these topics has necessarily varied from time to time. In discussing literal translations, for example, much attention has been paid to the value of the text, while little or nothing is said of the value of the rendering as literature. On the other hand, in the case of a book which is literary in aim, the attention paid to the critical value of the book is comparatively small. At certain periods in the history of the poem, the chief value of a translation is its utility as a part of the critical apparatus for the interpretation of the poem; at other periods, a translation lays claim to our attention chiefly as imparting the literary features of the original.

In speaking of the translations which we may call literary, I have naturally paid most attention to the English versions, and this for several reasons. In the first place, Beowulf is an English poem; secondly, the number, variety, and importance of the English translations warrant this emphasis; thirdly, the present writer is unable to discuss in detail the literary and metrical value of translations in foreign tongues. The account given of German, Dutch, Danish, Swedish, French, and Italian versions is, therefore, of a more strictly bibliographical nature; but, whenever possible, some notion has been given of the general critical opinion with regard to them.

An asterisk is placed before the titles of books which the present writer has not seen.

My thanks are due to the officials of the Library of Yale University, who secured for me many of the volumes here described; to Professor Ewald Flügel of Leland Stanford Junior University, who kindly lent me certain transcripts made for him at the British Museum; and to Mr. Edward Thorstenberg, Instructor in Swedish at Yale University, for help in reading the Danish and Swedish translations.

Preliminary Remarks on the Beowulf Manuscript