The Transgressors Story of a Great Sin 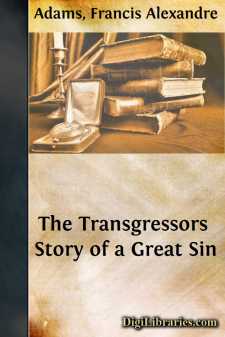 CHAPTER I. CLOUDS GATHER AT WILKES-BARRE.

There are few valleys to compare with that of the Susquehanna. In point of picturesque scenery and modern alteration attained by the unceasing labor of man, the antithesis between the natural and the artificial is pronounced in many respects; especially at that place in the river where it runs through the steep banks on which is situated the thriving city of Wilkes-Barre. Here may be seen the majestic hills standing as sentinels over the marts of men that crowd the river edge. The verdure of these hills during the greater part of the year is the one sight that gladdens the eyes of the miners whose lives, for the most part, are spent in the coal pits.

The picture would be perfect were it not for the presence of the Coal-Breakers. These sombre, grizzly structures stand in a long line on the west bank of the river, and appear to the eye of one who knows their purpose, as the gibbets that dotted the shores of England and France must have loomed up before the mariners of the Channel during the Seventeenth Century, and when the supply of pirates exceeded the number of gibbets, large as this number was in both lands.

The breaker is a truly modern invention, which, had it existed in the days of the Spanish inquisition, would have placed in the hands of the malevolent fanatics an instrument of exquisite torture. It is constructed to effect a double purpose, the achievement of the maximum of production and the expenditure of the minimum of human effort. It is the acme of inventive genius. To work the breakers, a man need have no more intelligence than the tow-mule that plods a beaten path; and such a man is the ideal laborer from the standpoint of the owners of the breakers.

But such men are not indigenous to America; they must be imported, and that, too, from the most benighted lands of Europe.

What an incubator of warped humanity the breaker has become! It saps even the attenuated manhood of the aliens it attracts, and when they are rendered useless for its ends, emits them to be a scourge on the earth.

But the breakers are the monument of the civilization of the NineteenthCentury, which esteems commercial as superior to mental advancement.

As the drama to be unfolded will be enacted largely in this spot, which nature fashioned on its fairest pattern, and which man has seared with his cruel tool, a description of the town of Wilkes-Barre and its environs is essential. The town is the creation of the Mines. Coal abounds in the valley of the Susquehanna, and from the first impetus given the coal industry by the establishment of railroads, the mines at this place have been worked without intermission. The population of the town has been increasing steadily for the past thirty years, until to-day it reaches the proportions of a populous city. There is little variety in the citizens; but the contrast they present makes up for this deficiency. Broadly speaking there are but two classes, the magnates and their mercenaries. The former live in the mansions on the esplanade and constitute the governing minority....