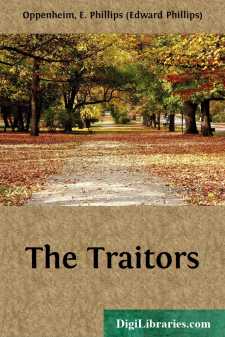 Add to My Favorites
Published: 9 years ago
Downloads: 96
Rating: (0 Votes)

Above the roaring of the north wind rose the clamour of voices, the cries of hate and disgust, the deep groaning sobs of fierce and militant anger. The man and the woman exchanged quick glances.

“They are coming nearer,” he said.

She drew aside the heavy curtain, and stood there, looking out into the night.

“It is so,” she answered. “They are pouring into the square.”

He rose and stood beneath the great carved mantelpiece. Over his head, hewn out of the solid oak, black with age and coloured with that deep richness which is to-day as a lost art, were blazoned the arms of one of Europe’s noblest families. He, Nicholas of Reist, its sole male representative, stood deep in thought, his dark young face furrowed with anxiety. The moment was critical. It was one of a lifetime.

She dropped the curtain and came over to his side. The flush of excitement was in her cheeks. Her eyes were like shining stars. Of their close relationship there could be no manner of doubt. The same oval face and finely-cut features, the same pride of race, the same firm, graceful bearing. Only there were lines upon his face—the lines of thought and care; whilst hers remained as smooth as damask, typically and wonderfully beautiful.

Again the murmur of hoarse voices—nearer now and more clamorous.

“Down with the traitor Metzger and his accursed government! Reist! Reist! A Reist!”

Her white fingers fell upon his shoulder.

“They are calling for you, Nicholas,” she said, softly. “Listen! It is the voice of our people, and they need you. Will you go out and speak to them? Shall I open the window—yes?”

Her hands were already upon the curtains. She turned around, an impatient frown upon her face.

“You do not hesitate, my brother,” she cried. “No, it is not possible. It is our country, Nicholas, our homeland which calls for you to save it.”

“Ay, to save it—but how? Metzger has made the way difficult.”

Her eyes flashed fire upon him. She was superbly disdainful.

“Are you the first Duke of Reist who has governed Theos?” she cried. “Is there not the blood of former Kings in your veins? Holy Mother, but it is intolerable that you should hesitate! Nicholas, if you let these people call in vain you will be the first of our race who has ever shrunk from his duty. I will not call you any longer my brother. Listen!”

He smiled faintly. Those subtle lines about his mouth were not there in vain.

“I wonder where Metzger is hiding,” he murmured. “How good it would be to see him now. How he would quiver and shake. There is death in those voices.”

She flashed a look of impatient scorn upon him.

“You are trifling with your destiny, Nicholas,” she cried. “What matters the life or death of such as Metzger? Our people need you. Out and tell the men of Theos that once again a Reist will save his country.”

Her eyes were ablaze with anger.

“Have I been mistaken in you all these years, Nicholas?” she cried. “Listen again. Those are the children of your city who call to you for aid. Have you no longer the heart of a man or the blood of a patriot?”

A storm of wind and rain shook the high windows. From below came the sound of a multitude thronging nearer and nearer till the square seemed filled to overflowing with a surging mob. The man raised his head as one who listens, and the smile no longer lightened his face. The woman who watched him anxiously drew a long sigh of relief. She knew then beyond a doubt that it needed no words from her to fire his resolution.

“Marie,” he said, quietly, “those are the voices which I have prayed all my life that I might hear. Only I fear that they have come too soon....