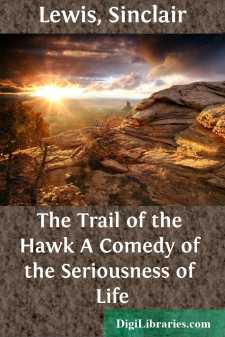 arl Ericson was being naughty. Probably no boy in Joralemon was being naughtier that October Saturday afternoon. He had not half finished the wood-piling which was his punishment for having chased the family rooster thirteen times squawking around the chicken-yard, while playing soldiers with Bennie Rusk.

He stood in the middle of the musty woodshed, pessimistically kicking at the scattered wood. His face was stern, as became a man of eight who was a soldier of fortune famed from the front gate to the chicken-yard. An unromantic film of dirt hid the fact that his Scandinavian cheeks were like cream-colored silk stained with rose-petals. A baby Norseman, with only an average boy's prettiness, yet with the whiteness and slenderness of a girl's little finger. A back-yard boy, in baggy jacket and pants, gingham blouse, and cap whose lining oozed back over his ash-blond hair, which was tangled now like trampled grass, with a tiny chip riding grotesquely on one flossy lock.

The darkness of the shed displeased Carl. The whole basic conception of work bored him. The sticks of wood were personal enemies to which he gave insulting names. He had always admired the hard bark and metallic resonance of the ironwood, but he hated the poplar—"popple" it is called in Joralemon, Minnesota. Poplar becomes dry and dusty, and the bark turns to a monstrously mottled and evil greenish-white. Carl announced to one poplar stick, "I could lick you! I'm a gen'ral, I am." The stick made no reply whatever, and he contemptuously shied it out into the chickweed which matted the grubby back yard. This necessitated his sneaking out and capturing it by stalking it from the rear, lest it rouse the Popple Army.

He loitered outside the shed, sniffing at the smoke from burning leaves—the scent of autumn and migration and wanderlust. He glanced down between houses to the reedy shore of Joralemon Lake. The surface of the water was smooth, and tinted like a bluebell, save for one patch in the current where wavelets leaped with October madness in sparkles of diamond fire. Across the lake, woods sprinkled with gold-dust and paprika broke the sweep of sparse yellow stubble, and a red barn was softly brilliant in the caressing sunlight and lively air of the Minnesota prairie. Over there was the field of valor, where grown-up men with shiny shotguns went hunting prairie-chickens; the Great World, leading clear to the Red River Valley and Canada.

Three mallard-ducks, with necks far out and wings beating hurriedly, shot over Carl's head. From far off a gun-shot floated echoing through forest hollows; in the waiting stillness sounded a rooster's crow, distant, magical.

"I want to go hunting!" mourned Carl, as he trailed back into the woodshed. It seemed darker than ever and smelled of moldy chips. He bounced like an enraged chipmunk. His phlegmatic china-blue eyes filmed with tears. "Won't pile no more wood!" he declared.

Naughty he undoubtedly was. But since he knew that his father, Oscar Ericson, the carpenter, all knuckles and patched overalls and bad temper, would probably whip him for rebellion, he may have acquired merit. He did not even look toward the house to see whether his mother was watching him—his farm-bred, worried, kindly, small, flat-chested, pinch-nosed, bleached, twangy-voiced, plucky Norwegian mother. He marched to the workshop and brought a collection of miscellaneous nails and screws out to a bare patch of earth in front of the chicken-yard. They were the Nail People, the most reckless band of mercenaries the world has ever known, led by old General Door-Hinge, who was somewhat inclined to collapse in the middle, but possessed of the unusual virtue of eyes in both ends of him. He had explored the deepest cañons of the woodshed, and victoriously led his ten-penny warriors against the sumacs in the vacant lot beyond Irving Lamb's house.

Carl marshaled the Nail People, sticking them upright in the ground. After reasoning sternly with an intruding sparrow, thus did the dauntless General Door-Hinge address them:

"Men, there's a nawful big army against us, but le's die like men, my men. Forwards!"

As the veteran finished, a devastating fire of stones enfiladed the company, and one by one they fell, save for the commander himself, who bowed his grizzled wrought-steel head and sobbed, "The brave boys done their duty."

From across the lake rolled another gun-shot....