The Tithe-Proctor The Works of William Carleton, Volume Two 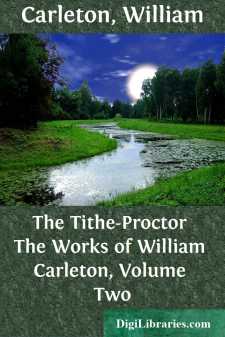 The chapel of Esker Dearg, or the Red Ridge, was situated in a rich and well-cultivated country, that for miles about it literally teemed with abundance. The Red Ridge under which it stood was one of those long eminences, almost, if not altogether, peculiar to Ireland. It was, as the name betokens, a prolonged elevation that ran for nearly a mile and a half in a north-eastern direction without appearing to yield to, or be influenced by, the natural position or undulations of the country through which it went. The epithet of red which was attached to it, originated, according to popular tradition, in a massacre which had taken place upon it during one of the Elizabethan wars, others imputed it to a cause much more obvious and natural, viz., its peculiar appearance during all seasons of the year, owing to the parched and barren nature of the soil, which, in consequence of its dry and elevated Position, was covered only with furze and tern, or thin, short grass that was parched by the sun into a kind of red-brown color.

Under that end of this Esker which pointed nearest to the south-west, stood the chapel we have just mentioned. It was a rather long building with double gables and a double roof, perfectly plain, and with no other ornament, either inside or out, if we except a marble cross that stood against the wall upon the altar, of which the good priest was not a little vain, inasmuch as it had been of his own procuring. A public road of course ran past it, or rather skirted the green unenclosed space, by which, in common with most country edifices, it was surrounded. Another road joined that which we have mentioned, within a few perches of it, so that it stood at what might be nearly considered a cross-road. One or two large trees grew beside it, which gave to its otherwise simple appearance something of picturesque effect, especially during the summer months, when they were thickly covered with leaves, and waved and rustled in the sun to the refreshing breezes of that delightful season.

It was Sunday in the early part of March—we will not name the year—when our story commences. The Red Ridge Chapel was as usual surrounded by the greater portion of the congregation that had assembled to hear Mass. Within its walls there were only a few classes of youngsters, male and female, formed into circles, learning their catechism from the schoolmaster of the neighborhood, the clerk, or some devotee who possessed education enough to qualify himself for that kind office. Here and there in different parts of the chapel were small groups of adult persons, more religiously disposed than the rest, engaged in saying the rosary, whilst several others were performing solitary devotions, some stationary in a corner of the chapel, and others going the circuit around its walls in the performance of the Fourteen Stations of the Cross. Now, all these religious and devotional acts take place previous to the arrival of the priest, and are suspended the moment he commences Mass; into the more sublime majesty of which they appear, as it were, to lose themselves and be absorbed....