The Tin Box and What it Contained 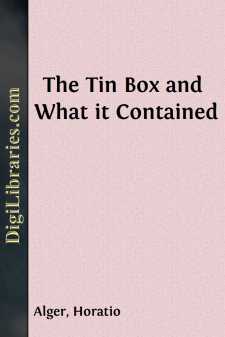 CHAPTER I A COLLISION

"Have you finished breakfast already, Harry?" asked Mrs. Gilbert, as Harry rose hurriedly from the table and reached for his hat, which hung on a nail especially appropriated to it.

"Yes, mother. I don't want to be late for the store. Saturday is always a busy day."

"It is a long day for you, Harry. You have to stay till nine o'clock in the evening."

"I am always glad to have Saturday come, for then I can get my money," replied Harry, laughing. "Well, good-by, mother—I'm off."

"What should I do without him?" said Mrs. Gilbert to herself, as Harry dashed out of the yard on the way to Mead's grocery store, where he had been employed for six months.

That would have been a difficult question to answer. Mrs. Gilbert was the widow of a sea captain, who had sailed from the port of Boston three years before, and never since been heard of.

It was supposed that the vessel was lost with all hands, but how the disaster occurred, or when, was a mystery that seemed never likely to be solved.

Captain Gilbert had left no property except the small cottage, which was mortgaged for half its value, and a small sum of money in the savings bank, which, by this time, was all expended for the necessaries of life.

Fortunately for the widow, about the time this sum gave out Harry obtained a situation at Mead's grocery store, with a salary of four dollars a week. This he regularly paid to his mother, and, with the little she herself was able to earn, they lived comfortably. It was hard work for Harry, but he enjoyed it, for he was an active boy, and it was a source of great satisfaction to him that he was able to help his mother so materially.

He was now fifteen years old, about the average height for a boy of that age, with a strong frame and a bright, cheerful manner that made him a general favorite.

The part of his duty which he liked best was to drive the store wagon for the delivery of goods to customers. Most boys of his age like to drive a horse, and Harry was no exception to the rule.

When he reached the store Mr. Mead, his employer, said:

"Harness up the horse as soon as you can, Harry. There are some goods to be carried out."

"All right, sir," answered Harry, cheerfully, and made his way to the stable, which stood in the rear of the store. It was but a few minutes before he was loaded up and was on his way.

He had called at several places and left the greater part of the goods, when he found himself in a narrow road, scarcely wider than a lane. Why it had been made so narrow was unaccountable, for there was certainly land enough to be had, and that of little value, which could have been used. It was probably owing to a want of foresight on the part of the road commissioners.

Just at the narrowest part of the road Harry saw approaching him an open buggy of rather a pretentious character, driven by a schoolmate, Philip Ross, the son of Colonel Ross, a wealthy resident of the village.

I have said that Philip was, or rather had been, a schoolmate of Harry....