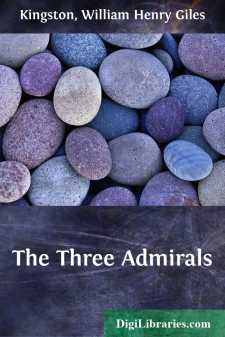 Her Majesty’s corvette Dragon, lately commanded by our old friend Jack Rogers, who had been superseded by Commander Rawson, was on her passage across the wide Pacific, bound for Esquimault harbour, Vancouver’s Island, from Japan, to which she had been sent with despatches.

The wind being fair, the screw was at rest, and she was under all sail, looking as trim and taunt a little man-of-war as a sailor’s heart could desire. Her stay in Japan had been short, so that no leave had been granted, and even the officers had seen little of the country and people; though, as they hoped to return before long, that did not much matter. As it was of no great importance that the Dragon should soon get back to Vancouver’s Island, Commander Rawson had received directions to visit the Ladrone Islands, somewhat to the southward of his course, in order to obtain particulars of an outrage, said to have been committed on an English subject by some of the mongrel inhabitants of those islands, which have for some centuries belonged to Spain.

The smooth sea shone brightly in the rays of the sun, undimmed by cloud or mist. In all directions the snowy wings of sea fowl could be seen, now dipping towards the ocean, now rising into the blue ether, showing that land was at no great distance. As the wind was from the northward, the air was cool, though the shady side of the ship was generally sought for by the watch on deck, except by a few whose heads seemed impervious to the hot rays of a tropical sun.

Two midshipmen were slowly pacing the port side of the quarter-deck, where a few feet of shade afforded them shelter from the heat. The one, a somewhat short, well-knit lad, with open countenance, well tanned, and blue laughing eyes, his whole appearance giving promise of strength and activity; the other, a tall youth with sandy hair, and pleasant features well freckled. Though tall, he was too well built to be called lanky, and showed that he possessed both strength and activity.

“I say, Archie, I do envy those fellows of the Eolus going on to China; they will see all sorts of fun, for the Celestials are sure not to give in in a hurry. The Eoluses will have the same sort of work that my brother Jack and your cousin Murray went through in the last Chinese war, when they were midshipmen.”

“Gerald was dreadfully cut up at not being able to remain on board the Eolus, and having instead to come back with us to return home; but Captain Adair’s letter was peremptory, and, as the newspapers say, I hope that he will hear of something to his advantage. Gerald would have been better pleased had his uncle let him know why he was sent for.”

“He has no great cause to complain, seeing that the climate of China is none of the most delectable, and he would have run the risk of being shot into the bargain,” observed Archie. “I wish that I had the chance of going home, and finding myself the possessor of a tidy fortune with a title.”

“But then there’s the honour and glory, and the fun, and the pig-tails to be captured, and the loot, and the chance of serving in a naval brigade and seeing some work on shore, just as the Shannon’s people did in India, with a fair prospect of promotion at the end of it.”

“If a body happens not to be shot, ye ken,” observed Archie, who, though every bit as eager as Tom for the sort of work he described, took a pleasure in differing in opinion from him whenever he could....