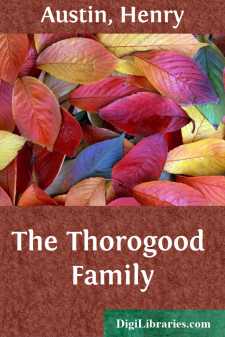 This family was not only Thorogood but thorough-going. The father was a blacksmith, with five sons and one daughter, and he used to hammer truth into his children’s heads with as much vigour as he was wont to hammer the tough iron on his anvil; but he did it kindly. He was not a growly-wowly, cross-grained man, like some fathers we know of—not he. His broad, hairy face was like a sun, and his eyes darted sunbeams wherever they turned. The faces of his five sons were just like his own, except in regard to roughness and hair. Tom, and Dick, and Harry, and Bob, and Jim, were their names. Jim was the baby. Their ages were equally separated. If you began with Jim, who was three, you had only to say—four, five, six, seven—Tom being seven.

These five boys were broad, and sturdy, like their father. Like him, also, they were fond of noise and hammering. They hammered the furniture of their father’s cottage, until all of it that was weak was smashed, and all that was strong became dreadfully dinted. They also hammered each other’s noses with their little fat fists, at times, but they soon grew too old and wise for that; they soon, also, left off hammering the heads of their sister’s dolls, which was a favourite amusement in their earlier days.

The mention of dolls brings us to the sister. She was like her mother—little, soft, fair, and sweet-voiced; just as unlike her brothers in appearance as possible—except that she had their bright blue, blazing eyes. Her age was eight years.

It was, truly, a sight to behold this family sit down to supper of an evening. The blacksmith would come in and seize little Jim in his brawny arms, and toss him up to the very beams of the ceiling, after which he would take little Molly on his knee, and fondle her, while “Old Moll,” as he sometimes called his wife, spread the cloth and loaded the table with good things.

A cat, a kitten, and a terrier, lived together in that smith’s cottage on friendly terms. They romped with each other, and with the five boys, so that the noise used sometimes to be tremendous; but it was not an unpleasant noise, because there were no sounds of discontent or quarrelling in it. You see, the blacksmith and his wife trained that family well. It is wonderful what an amount of noise one can stand when it is good-humoured noise.

Well, this blacksmith had a favourite maxim, which he was fond of impressing on his children. It was this— “Whatever your hand finds to do, do it with all your might, doing it as if to the Lord, and not to men.” We need hardly say that he found something like this maxim in the Bible—a grand channel through which wisdom flows to man.

Of course he had some trouble in teaching his little ones, just as other fathers have. One evening, when speaking about this favourite maxim, he was interrupted by a most awful yell under the table.

“Why, what ever is the matter with the cat?” said the blacksmith in surprise.

“Ah, Jim!” said Mrs Thorogood, laughing, as she placed a huge plate of crumpets on the table, “it’s only when a thing is right we are to do it with our might....