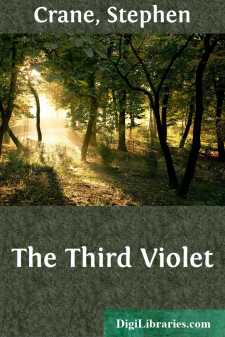 The engine bellowed its way up the slanting, winding valley. Grey crags, and trees with roots fastened cleverly to the steeps looked down at the struggles of the black monster.

When the train finally released its passengers they burst forth with the enthusiasm of escaping convicts. A great bustle ensued on the platform of the little mountain station. The idlers and philosophers from the village were present to examine the consignment of people from the city. These latter, loaded with bundles and children, thronged at the stage drivers. The stage drivers thronged at the people from the city.

Hawker, with his clothes case, his paint-box, his easel, climbed awkwardly down the steps of the car. The easel swung uncontrolled and knocked against the head of a little boy who was disembarking backward with fine caution. "Hello, little man," said Hawker, "did it hurt?" The child regarded him in silence and with sudden interest, as if Hawker had called his attention to a phenomenon. The young painter was politely waiting until the little boy should conclude his examination, but a voice behind him cried, "Roger, go on down!" A nursemaid was conducting a little girl where she would probably be struck by the other end of the easel. The boy resumed his cautious descent.

The stage drivers made such great noise as a collection that as individuals their identities were lost. With a highly important air, as a man proud of being so busy, the baggageman of the train was thundering trunks at the other employees on the platform. Hawker, prowling through the crowd, heard a voice near his shoulder say, "Do you know where is the stage for Hemlock Inn?" Hawker turned and found a young woman regarding him. A wave of astonishment whirled into his hair, and he turned his eyes quickly for fear that she would think that he had looked at her. He said, "Yes, certainly, I think I can find it." At the same time he was crying to himself: "Wouldn't I like to paint her, though! What a glance—oh, murder! The—the—the distance in her eyes!"

The driver inserted Hawker and his luggage far into the end of the vehicle. He sat there, crooked forward so that his eyes should see the first coming of the girl into the frame of light at the other end of the stage. Presently she appeared there. She was bringing the little boy, the little girl, the nursemaid, and another young woman, who was at once to be known as the mother of the two children. The girl indicated the stage with a small gesture of triumph. When they were all seated uncomfortably in the huge covered vehicle the little boy gave Hawker a glance of recognition. "It hurted then, but it's all right now," he informed him cheerfully.

"Oh, I didn't mind it much," continued the little boy, swinging his long, red-leather leggings bravely to and fro. "I don't cry when I'm hurt, anyhow." He cast a meaning look at his tiny sister, whose soft lips set defensively.

The driver climbed into his seat, and after a scrutiny of the group in the gloom of the stage he chirped to his horses. They began a slow and thoughtful trotting. Dust streamed out behind the vehicle. In front, the green hills were still and serene in the evening air. A beam of gold struck them aslant, and on the sky was lemon and pink information of the sun's sinking. The driver knew many people along the road, and from time to time he conversed with them in yells....