The Third Degree A Narrative of Metropolitan Life 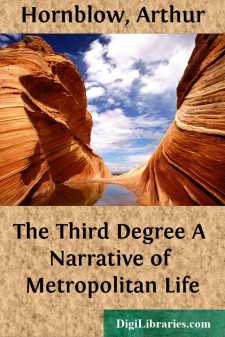 Caught in the swirl of the busy city's midday rush, engulfed in Broadway's swift moving flood of hustling humanity, jostled unceremoniously by the careless, indifferent crowds, discouraged from stemming further the tide of pushing, elbowing men and women who hurried up and down the great thoroughfare, Howard Jeffries, tired and hungry and thoroughly disgusted with himself, stood still at the corner of Fulton street, cursing the luck which had brought him to his present plight.

It was the noon hour, the important time of day when nature loudly claims her due, when business affairs, no matter how pressing, must be temporarily interrupted so that the human machine may lay in a fresh store of nervous energy. From under the portals of precipitous office buildings, mammoth hives of human industry, which to right and left soared dizzily from street to sky, swarmed thousands of employees of both sexes—clerks, stenographers, shop-girls, messenger boys, all moved by a common impulse to satisfy without further delay the animal cravings of their physical natures. They strode along with quick, nervous step, each chatting and laughing with his fellow, interested for the nonce in the day's work, making plans for well-earned recreation when five o'clock should come and the up-town stampede for Harlem and home begin.

The young man sullenly watched the scene, envious of the energy and activity of all about him. Each one in these hurrying throngs, he thought bitterly to himself, was a valuable unit in the prosperity and welfare of the big town. No matter how humble his or her position, each played a part in the business life of the great city, each was an unseen, unknown, yet indispensable cog in the whirling, complicated mechanism of the vast world-metropolis. Intuitively he felt that he was not one of them, that he had no right even to consider himself their equal. He was utterly useless to anybody. He was without position or money. He was destitute even of a shred of self-respect. Hadn't he promised Annie not to touch liquor again before he found a job? Yet he had already imbibed all the whiskey which the little money left in his pocket would buy.

Involuntarily, instinctively, he shrank back into the shadow of a doorway to let the crowds pass. The pavements were now filled to overflowing and each moment newcomers from the side streets came to swell the human stream. He tried to avoid observation, fearing that some one might recognize him, thinking all could read on his face that he was a sot, a self-confessed failure, one of life's incompetents. In his painful self-consciousness he believed himself the cynosure of every eye and he winced as he thought he detected on certain faces side glances of curiosity, commiseration and contempt.

Nor was he altogether mistaken. More than one passer-by turned to look in his direction, attracted by his peculiar appearance. His was a type not seen every day in the commercial district—the post-graduate college man out at elbows....