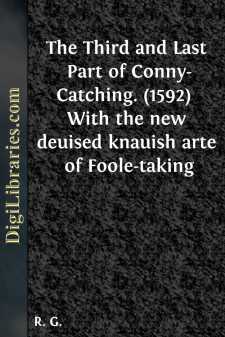 TO ALL SVCH AS HAVE receiued either pleasure or profite by the two former published bookes of this Argument: And to all beside, that desire to know the wonderfull slie deuises of this hellish crew of Conny-catchers.

In the time of king Henrie the fourth, as our English Chronicles haue kept in remembrance, liued diuerse sturdie and loose companions in sundrie places about the Citie of London, who gaue themselues to no good course of life, but because the time was somewhat troublesome, watched diligently, when by the least occasion of mutinie offered, they might praie vppon the goods of honest Citizens, and so by their spoyle inrich themselues. At that time liued likewise a worthie Gentleman, whose many verie famius deeds (wherof I am sorie I may here make no rehearsal, because neither time nor occasion will permitte me) renowne his name to all ensuing posterities: he, being called sir Richard Whittington, the founder of Whittington Colledge in London, and one that bare the office of Lord Maior of this Citie three seuerall times. This worthie man wel noting the dangerous disposition of that idle kinde of people, tooke such good and discreete order (after hee had sent diuers of them to serue in the kings warres, and they loath to doe so well returned to their former vomite) that in no place of or about London they might haue lodging, or entertainment, except they applied themselues to such honest trades and exercises, as might witnesse their maintaining was by true and honest meanes. If any to the contrarie were founde, they were in iustice so sharply proceeded against, as the most hurtfull and dangerous enemies to the commonwealth.

In this quiet and most blissefull time of peace, when all men (in course of life) should shew themselves most thankfull for so great a benefit, this famous citie is pestered with the like, or rather worse kinde of people, that beare outward shew of ciuill, honest, and gentlemanlike disposition, but in very deed their behauiour is most infamous to be spoken of. And as now by their close villanies they cheate, cosen, prig, lift, nippe, and such like tricks now vsed in their Conie-catching Trade, to the hurt and vndoing of many an honest Citizen, and other: So if God should in iustice be angrie with vs, as our wickednesse hath well deserued, and (as the Lorde forsend) our peace should be molested as in former time, euen as they did, so will these be the first in seeking domesticall spoile and ruine: yea so they may haue it, it skilles not how they come by it. God raise such another as was worthie Whittington, that in time may bridle the headstrong course of this hellish crew, and force them liue as becommeth honest subiects, or els to abide the rewarde of their loosenesse.

By reading this little tratise ensuing, you shall see to what marueilous subtil pollicies these deceiuers have atteyned, and how daylie they practise strange driftes for their purpose. I say no more, but if all these forewarnings may be regarded, to the beneft of the well minded, and iust controll of these carelesse wretches, it is all I desire, and no more then I hope to see.

Yours in all he may