The Things Which Remain An Address To Young Ministers

by Daniel A. (Daniel Ayres) Goodsell 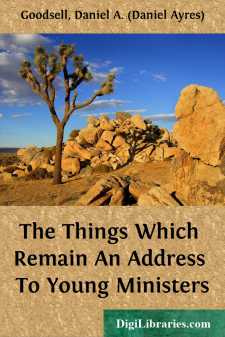 The Things Which Remain

The followers of Him who said "I am the Truth" can never afford to hold or propagate that which is false. No man can preach with power unless he strongly believes. Teaching force depends on Faith.

Conditions of the Call.

Thus far our ministry has had teaching power because it has been founded on and inspired by a Christian experience. Our Church has always emphasized that essential Christian statement, "If ye do ye shall know." At every ordination we have demanded of every candidate a declaration of his persuasion that he was "called according to the will of our Lord Jesus Christ" to the particular office to which he was then to be advanced. By this we do not mean a mediate call through the order of the Church or the judgment of the Bishop, but an immediate call by the Holy Spirit from Christ Himself. This call is antedated by that personal surrender to Jesus Christ; that blessed acceptance by Him of the self-surrendered; that witnessing Spirit as to sonship which brings the consciousness of pardon, renewal, and justification known as "a religious experience."

Evidence of the Call.

Those who possess this know something. Whereas they were "once blind, now they see." They know they have "passed from darkness to light" through the changed love which now controls. However the persuasion reached them, it is a persuasion; not merely a hope. It is a conclusion borne in upon them by satisfactory evidence, and is a lasting certainty while the faith which brought it abides in its original measure.

Thus to-day we have a pulpit substantially in doctrine and force what our pulpit always has been. Even in some cases where doubt has entered, it would appear that this Christian experience has steadied the wavering head by the full and regular impulses of the believing heart.

It is, however, to be admitted that the years to which we have come bring with them problems which our fathers did not have to solve. Doubts of which they knew nothing throng our atmosphere and crowd upon our consciousness. The attacks on Christianity are no longer the ribald jeers of the unlovely and the vile. They come in the name of honest investigation, historical veracity, and scientific accuracy; and are projected by characters apparently truth-loving, reverent, and candid.

The Sources of Advanced Criticism.

This may be said for most of them, but on occasion it is hard to believe that all the German critics are wholly and exclusively truth-loving and candid. So extreme are the positions of some, so evidently tinctured with overreadiness for criticism and unbelief, that they must be excluded from the "most" above described.

I speak of the Germans because they, chiefly, are those capable and active in original research. Most of our American "advanced critics" are merely translators and adapters of German work. Their volumes add nothing to the controversy to those who know the German originals....