The Theory of the Theatre 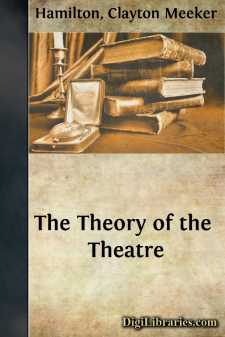 I WHAT IS A PLAY?

A play is a story devised to be presented by actors on a stage before an audience.

This plain statement of fact affords an exceedingly simple definition of the drama,—a definition so simple indeed as to seem at the first glance easily obvious and therefore scarcely worthy of expression. But if we examine the statement thoroughly, phrase by phrase, we shall see that it sums up within itself the entire theory of the theatre, and that from this primary axiom we may deduce the whole practical philosophy of dramatic criticism.

It is unnecessary to linger long over an explanation of the word "story." A story is a representation of a series of events linked together by the law of cause and effect and marching forward toward a predestined culmination,—each event exhibiting imagined characters performing imagined acts in an appropriate imagined setting. This definition applies, of course, to the epic, the ballad, the novel, the short-story, and all other forms of narrative art, as well as to the drama.

But the phrase "devised to be presented" distinguishes the drama sharply from all other forms of narrative. In particular it must be noted that a play is not a story that is written to be read. By no means must the drama be considered primarily as a department of literature,—like the epic or the novel, for example. Rather, from the standpoint of the theatre, should literature be considered as only one of a multitude of means which the dramatist must employ to convey his story effectively to the audience. The great Greek dramatists needed a sense of sculpture as well as a sense of poetry; and in the contemporary theatre the playwright must manifest the imagination of the painter as well as the imagination of the man of letters. The appeal of a play is primarily visual rather than auditory. On the contemporary stage, characters properly costumed must be exhibited within a carefully designed and painted setting illuminated with appropriate effects of light and shadow; and the art of music is often called upon to render incidental aid to the general impression. The dramatist, therefore, must be endowed not only with the literary sense, but also with a clear eye for the graphic and plastic elements of pictorial effect, a sense of rhythm and of music, and a thorough knowledge of the art of acting. Since the dramatist must, at the same time and in the same work, harness and harmonise the methods of so many of the arts, it would be uncritical to centre studious consideration solely on his dialogue and to praise him or condemn him on the literary ground alone.

It is, of course, true that the very greatest plays have always been great literature as well as great drama. The purely literary element—the final touch of style in dialogue—is the only sure antidote against the opium of time. Now that Aeschylus is no longer performed as a playwright, we read him as a poet. But, on the other hand, we should remember that the main reason why he is no longer played is that his dramas do not fit the modern theatre,—an edifice totally different in size and shape and physical appointments from that in which his pieces were devised to be presented....