The Theory of Social Revolutions 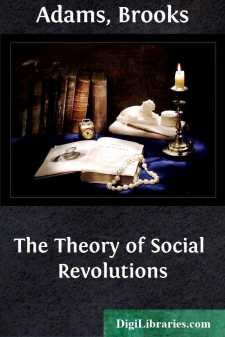 THE COLLAPSE OF CAPITALISTIC GOVERNMENT

Civilization, I apprehend, is nearly synonymous with order. However much we may differ touching such matters as the distribution of property, the domestic relations, the law of inheritance and the like, most of us, I should suppose, would agree that without order civilization, as we understand it, cannot exist. Now, although the optimist contends that, since man cannot foresee the future, worry about the future is futile, and that everything, in the best possible of worlds, is inevitably for the best, I think it clear that within recent years an uneasy suspicion has come into being that the principle of authority has been dangerously impaired, and that the social system, if it is to cohere, must be reorganized. So far as my observation has extended, such intuitions are usually not without an adequate cause, and if there be reason for anxiety anywhere, it surely should be in the United States, with its unwieldy bulk, its heterogeneous population, and its complex government. Therefore, I submit, that an hour may not be quite wasted which is passed in considering some of the recent phenomena which have appeared about us, in order to ascertain if they can be grouped together in any comprehensible relation.

About a century ago, after, the American and French Revolutions and the Napoleonic wars, the present industrial era opened, and brought with it a new governing class, as every considerable change in human environment must bring with it a governing class to give it expression. Perhaps, for lack of a recognized name, I may describe this class as the industrial capitalistic class, composed in the main of administrators and bankers. As nothing in the universe is stationary, ruling classes have their rise, culmination, and decline, and I conjecture that this class attained to its acme of popularity and power, at least in America, toward the close of the third quarter of the nineteenth century. I draw this inference from the fact that in the next quarter resistance to capitalistic methods began to take shape in such legislation as the Interstate Commerce Law and the Sherman Act, and almost at the opening of the present century a progressively rigorous opposition found for its mouthpiece the President of the Union himself. History may not be a very practical study, but it teaches some useful lessons, one of which is that nothing is accidental, and that if men move in a given direction, they do so in obedience to an impulsion as automatic as is the impulsion of gravitation. Therefore, if Mr. Roosevelt became, what his adversaries are pleased to call, an agitator, his agitation had a cause which is as deserving of study as is the path of a cyclone. This problem has long interested me, and I harbor no doubt not only that the equilibrium of society is very rapidly shifting, but that Mr. Roosevelt has, half-automatically, been stimulated by the instability about him to seek for a new centre of social gravity. In plain English, I infer that he has concluded that industrialism has induced conditions which can no longer be controlled by the old capitalistic methods, and that the country must be brought to a level of administrative efficiency competent to deal with the strains and stresses of the twentieth century, just as, a hundred and twenty-five years ago, the country was brought to an administrative level competent for that age, by the adoption of the Constitution....