The Texan A Story of the Cattle Country 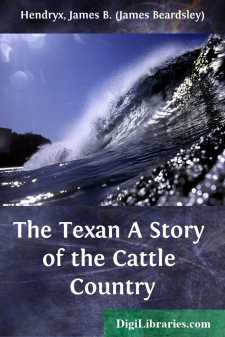 Exactly twenty minutes after young Benton dismounted from his big rangy black before the door of a low adobe saloon that fronted upon one of the narrow crooked streets of old Las Vegas, he glanced into the eyes of the thin-lipped croupier and laughed. "You've got 'em. Seventy-four good old Texas dollars." He held up a coin between his thumb and forefinger. "I've got another one left, an' your boss is goin' to get that, too—but he's goin' to get it in legitimate barter an' trade."

As the cowpuncher stepped to the bar that occupied one side of the room, a group of Mexicans who had lounged back at his entrance crowded once more about the wheel and began noisily to place their bets. He watched them for a moment before turning his attention to the heavy-lidded, flabby-jowled person who leaned ponderously against the sober side of the bar.

"Who owns this joint?" he asked truculently, as he eyed with disfavour the filthy shirt-sleeves rolled back from thick forearms, the sagging vest, and the collarless shirt-band that buried itself in a fold of the fat neck.

"Nary kick." The cowpuncher tossed his dollar onto the bar. "Give me a little red licker," he ordered, and grinned at the sullen proprietor as he filled his glass to the brim.

"An outfit," he confided, with slow insolence, "that'll run an eagle-bird wheel ain't got no more conscience than a hombre's got brains that'll buck one. In Texas we'd shoot a man full of little holes that 'ud try it."

"Why'n you stay in Texas, then?" growled the other.

The cowman drank his liquor and refilled the glass. "Most fat men," he imparted irrelevantly, "are plumb mindful that they're easy hit, an' consequent they're cheerful-hearted an' friendly. Likewise, they mind their own business, which is also why they've be'n let grow to onhuman proportions. But, not to seem oncivil to a stranger, an' by way of gettin' acquainted, I'll leak it out that it ain't no fault of Texas that I come away from there—but owin' only to a honin' of mine to see more of the world than what Texas affords.

"The way to see a world," I debates, "is like anythin' else—begin at the bottom an' work up. So I selects seventy-five dollars an' hits fer Las Vegas."

The fat man pocketed the dollar and replaced it with a greasy fifty-cent piece, an operation which the Texan watched with interest as he swallowed his liquor.

"They ain't nothin' like eagle-bird wheels an' snake-liniment at two bits a throw to help a man start at the bottom," he opined, and reaching for the half-dollar, tossed it to a forlorn-looking individual who lounged near the door. "Here, Greaser, lend a hand in helpin' me downward! Here's four bits. Go lay it on the wheel—an' say: I got a hunch! I played every number on that wheel except the thirteen—judgin' it to be onlucky." The forlorn one grinned his understanding, and clutching the piece of silver, elbowed into the group that crowded the roulette wheel. The cowpuncher turned once more to the surly proprietor:

"So now you see me, broke an' among evil companions, in this here God-forsaken, lizard-ridden, Greaser-loving sheep-herdin' land of sorrow....